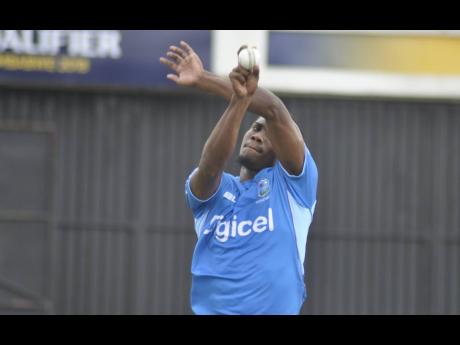 There was major frustration for Leeward Islands Hurricanes as they watched their West Indies Cricket Championship title challenge continue to disappear, after the penultimate day of their fifth-round clash against Jamaica Scorpions was again wrecked by rain here yesterday.

Only three overs were possible, Hurricanes ambling to four without loss before the inclement weather, which caused a complete washout of the second day, returned to mar proceedings at the Brian Lara Stadium.

Hurricanes, who entered the final round less than two points behind leaders Barbados Pride, will now have to hope for a dramatic final day today whereby they overhaul Scorpions’ first innings of 302 and rain continues to stall Pride’s contest against Windward Islands Volcanoes at Diego Martin Complex.

Hurricanes have 65.4 points in second while Pride, also the defending champions, have 67 points at the top.

They too were hamstrung by rain yesterday, unable to even take the field as the day’s play was called off early due to the wet conditions.

They remain on 109 for one in reply to Volcanoes’ 203 all out, still 94 runs adrift of overhauling their first-innings target.

In the other game at Queen’s Park Oval, 16 overs were bowled in which time Guyana Harpy Eagles marched to 30 without loss in reply to Trinidad and Tobago Red Force’s first innings of 218.

Test speedster Shannon Gabriel, resuming the morning on four, added just one before losing his off-stump to Paul while Terrance Hinds, unbeaten on nine, finished 22 not out.

Rain then halted play with Harpy Eagles on 19 without loss after 90 minutes of the morning session and even though players returned later in the day, only 20 balls were possible before the rains arrived again.

Neither of the two teams is in contention for the title.