Arnett not a one man team - Rademakers 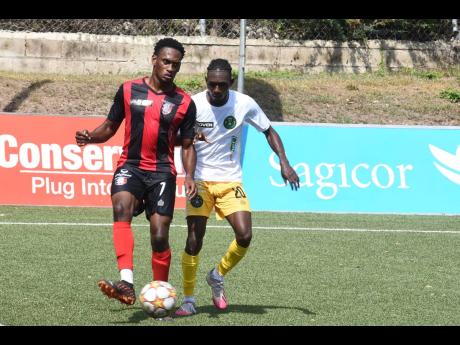 For most onlookers, the absence of Arnett Gardens winger, Renaldo Cephas, who moved to Macedonian champions FC Shkupi recently, will be a big blow to the ‘Junglists’ chances of winning the Jamaica Premier League (JPL) this season. However,...

For most onlookers, the absence of Arnett Gardens winger, Renaldo Cephas, who moved to Macedonian champions FC Shkupi recently, will be a big blow to the ‘Junglists’ chances of winning the Jamaica Premier League (JPL) this season.

However, assistant coach Eric Rademakers, said the team has shown over the course of the season that they are more than capable of coping with losses, and he expected the players to maintain their standard of performance, even with this latest adversity.

He pointed to the team’s wins over Portmore and Harbour View, when they lost players to red cards, as well as Cephas’ absence for their last match against regular season winners Waterhouse, who they defeated 4-2 in convincing fashion, as proof that they can cope.

“Chevaney Willis (former Portmore and national midfielder) came and played four or five matches before moving to the United Soccer League. He was our vice captain and an influential player.

“We lost him, but 90 per cent fans who watch our matches have forgotten about him.

“It is the same with Cephas right now. People will be talking about that Waterhouse match, as it shows that we are not missing Cephas.

“We gave other players a rest, the same for the Tivoli game and we won 3-1. So it is an indication that you cannot just look out for one player. We have plenty of players that can play good football.”

Although he admitted that the qualities Cephas possesses cannot be easily replaced, Rademakers said is more happy for the opportunity for the player, who he believes has a lot more room for development, and he hopes his new environment will provide him with the tools to realise his full potential.

“Of course you are always going to miss a quality player like that, but we have a team that can step up and really do good.

“We are excited for him. But do I think it will cost us the championship?No, I do not think so.

“But it is good our players can get international call-ups and it fits into our philosophy at Arnett. We want to contribute to more players leaving. We have asked the players to use Arnett to get to the next level.

“So we are very happy for Cephas. He goes to play Champions League qualifiers on July 5 and I hope when he gets in the environment and is surrounded by players of high quality, he lifts his level because he has something special which we really hope to see one day with the Reggae Boyz,” Rademakers said.

Arnett face Harbour View in the first leg of a JPL quarterfinal today.