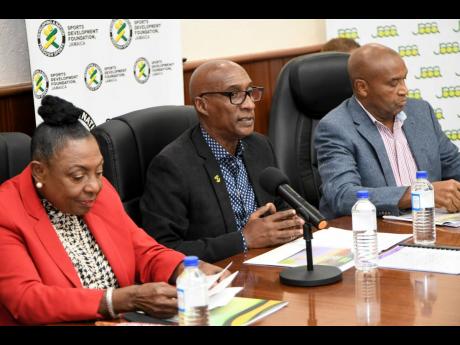 Gayle was speaking at yesterday’s launch at their Tremaine Road headquarters where 597 athletes have been entered to take part in the four-day meet, which will determine the team for the World Championships next month in Oregon, the World Under-20 Championships in Colombia and the Commonwealth Games in August.

The Jamaica Anti-Doping Commission (JADCO) has come under scrutiny after failing to test a member of the would-have-been world-record-breaking Under-20 4x100m women’s team at the Carifta Games in April. World Athletics refused to ratify the 42.58-second clocking based on that procedural anomaly.

Gayle is adamant the JAAA and JADCO have gone over all testing requirements as it relates to world record protocols to ensure that a similar incident is not repeated at the championships.

“We have revisited several of the guidelines with JADCO and we are assured that they will work with us, as we work with them to ensure that all the areas, all the details are covered, starting from the (protocol) of a world record, which is not out of our reach, to a national record and so forth,” Gayle said.

“Working along with JADCO officials, we will ensure, along with our medical commission, that all the pertinent rules that govern such a competition as our senior and junior championships would be honoured.”

“They would have been in discussions with our medical team. We have ensured that all our senior athletes and also those in the testing pool have already done the mandatory three anti-doping tests leading into Eugene and other international events. We are assured that we would not have any further embarrassment,” Gayle said.

Sports Minister Olivia Grange, who said that sanctions would be coming in response to the error, said she is awaiting guidance from the disciplinary committee as to the specific penalties that would be levied. Grange did not mention a timeline as to when those sanctions would be enforced.

“I have not had any further reports since on what their findings or decisions are and what the sanctions are. I await that information,” Grange said.

Grange said the current board has the responsibility to ensure they do the required testing retraining that she highlighted in her Sectoral Debate presentation earlier this month.