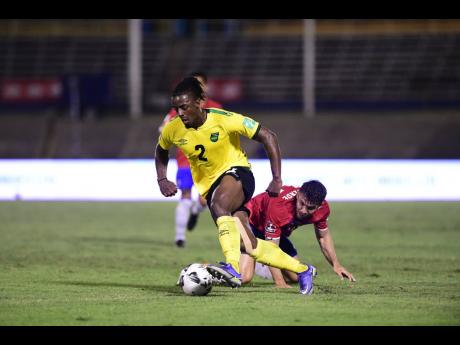 Gladstone Taylor
Jamaica’s Gregory Leigh goes by Jefry Watson of Costa Rica during the teams’ Concacaf World Cup qualifier at the National Stadium in Kingston back in February.

REGGAE BOY Greg Leigh has taken a “massive step” by penning a two-year deal with English League One side Ipswich Town.

The 27-year-old left-back played 47 games for League One rivals Morecambe last season, scoring twice, but was not offered a new contract by the Lancashire outfit.

Leigh appeared for England’s Under-19 side before choosing to play for Jamaica and has eight international caps for the Reggae Boyz so far.

Leigh, who began his career as a trainee at Manchester City, also had spells at two other English teams, Bradford City and Bury, as well as with Dutch outfit NAC Breda and Scottish side Aberdeen.

“He has lots of good physical attributes which will add to the squad,” Ipswich manager Kieran McKenna said.

Leigh is the third summer signing for Ipswich, a Suffolk club, who finished 11th last season, following the arrival of Freddie Ladapo and Dom Ball.

“It’s a massive step for me and I’m really excited,” Leigh said.