‘Reggae Girlz to be hurt without practice games’ 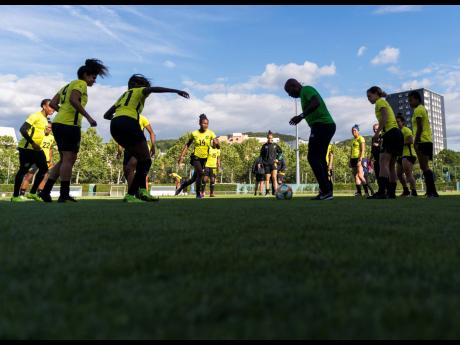 Gladstone Taylor/Multimedia Photo Editor
Lorne Donaldson joins the Reggae Girlz in training drills at a session at Stade Eugene Thenard in Grenoble, France, ahead of a World Cup game against Australia in 2019.

FORMER NATIONAL senior women’s coaches Christopher Bender and Charles Edwards argue that the lack of practice games for the Reggae Girlz going into the Concacaf Women’s Championship, which takes place in Mexico from July 4-18, is problematic.

Reggae Girlz coach Lorne Donaldson, in a recent interview, said he was not worried and anticipates they will get a few matches against U16 boys teams and women’s club teams in Colorado, where a two-week training camp is being held, before they depart for the championship.

While Edwards is a little less optimistic, he believes the players already have experience playing together and having a coach who has worked with this particular group is a plus.

“All coaches like practice games to look at their squads and do a proper assessment and get the proper system in place and the chemistry going.

“But this team played about four games together and it is the same squad from the World Cup. So there is a lot of familiarity and chemistry from before,” he said.

“Lorne Donaldson, an experience coach, seems okay with the situation. He is not a hundred per cent okay but he saying that we should not be worried,” Edwards reasoned.

Edwards said the two-week camp to fine-tune preparation is a very positive thing and he believes Donaldson will use his experience to compensate for the shortcoming of no international practice games.

“The good thing is we have a two-week camp and that is a big plus. He [Donaldson] should be managing the players to get them fit and sharp.

“A game or two would have been a big plus but I am pretty happy for the camp. In Colorado they could get a game or two and have high-intensity training.

“But it’s how the coach handles the situation and the things he puts in place. So let us see if we can muster enough and do enough to qualify for the next stage,” he said.

“But we need to give our confidence to the coach and the players and rally behind them and push them as much as we can,” he added.

Bender, Jamaica’s first national coach who served for many years, pointed that the age-old problem is not peculiar to the present Jamaica Football Federation (JFF) administration.

Like Edwards, Bender thinks it is an advantage having a coach who his familiar with the team, but without international games to assess performance, he said it will be extremely tough on the Girlz.

“This coach knows the players, but having no practice games will affect the team. Coaches always want more time and games for their team and to give these girls a real chance in a difficult zone, a couple games would have been good.

“Practice matches help. You see and work on things in the game, like different formations and different systems with different players

“So without any practice games, it will be very difficult for the coach, no matter how good you are.

“The coach has to work a miracle but we are hopeful the team can qualify,” he commented.

He pointed to similar scenarios hindering the preparation of the under-20 boys, currently playing in Honduras, and under-17 boys and girls, who also had no practice games.

“Having no games spells difficulties and causes problems. So it is a big challenge for the coach. Three to four games would have help us tremendously.

“But I am very hopeful. My heart says we can qualify, but my head is telling me that it is going to be very difficult,” he added.

Jamaica play in Group A with the United States, hosts Mexico, and Haiti. The top two teams from the group advance to the semi-finals and qualify for the World Cup.