All to play for after deadlocked first legs 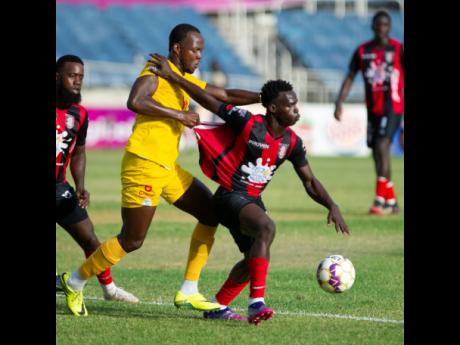 CAVALIER AND MOUNT Pleasant square off in the second leg of the Jamaica Premier League (JPL) quarterfinal this evening at Sabina Park at 5 pm and both camps are expressing confidence of victory ahead of the decisive match.

Both quarterfinals ended in draws on Monday with Arnett Garden and Harbour View playing to a 1-1 draw, while Mount Pleasant and Cavalier finished goalless.

Mount Pleasant general manager, David Galloway, said his team took a lot of positives from Monday’s first leg, even though they have failed to beat the defending champions in three attempts this season.

He stated that his team will ‘deliver’ when they meet again for today’s second leg.

“We expected better [Monday]. It was not what we wanted, but they did well. The team played well and we got chances, but Thursday we know that we are going to deliver,” he said.

“We are very confident even though Cavalier is always a difficult team for us. We never give up. We have to come back and get the win and that is the aim,” he said.

On Monday, Cavalier looked the more purposeful of the teams, but were lacking the final pass.

However, Mount Pleasant showed moments of quality, meaning Cavalier can only underestimate them at their peril.

Cavalier assistant coach, David Laylor, admits the decisive pass was missing from their game on Monday, but said they will be boosted by the return of a couple of players and he expects them to go on and take the tie.

“We are missing a few players and when we get those players back we believe the adjustments will be sufficient for us to take it home. We hope to move the ball around and put Mount Pleasant on the back foot,” he said.

Despite Cavalier’s impressive record against Mount Pleasant since the St Ann club entered the league in 2018, playing them in a knockout game is much harder than playing them in the regular season Laylor said.

“It is a final and every final is going to be a bit different and a bit tougher. We will have to fix up some stuff and come and hope for the best.

“You are as good as your last game and the game was a little flat for us. This is a tough Mount Pleasant team, so we will make the adjustments and see what happens,” he said.

In the other game at 7:30 p.m. Arnett coach Paul ‘Tegat’ Davis said without top striker Renaldo Cephas they have had to adjust, but he has no doubt victory will be theirs.

“I wouldn’t say so (underperformed first leg). With Cephas out people will say, ‘yes’. But it’s a different ball game and we have to learn to adjust.

“With Cephas’ pace we would have been much better but now we have to play more as a team. But we are going to win the second leg. We will beat them,” he declared.

Harbour View’s assistant coach, Sean Fraser, said although their first leg performance surprised most, they are well aware of their capabilities.

However, consistency has been their downfall and he hopes the team can reproduce their display.

“Our performance surprised the fans, but it didn’t surprise us. We knew what we have. All we need is the consistency. We have players that can create good opportunities and make things happen. We made a single mistake and it cost us, but we will bounce back,” he said