Double Diva too tough over five and a half 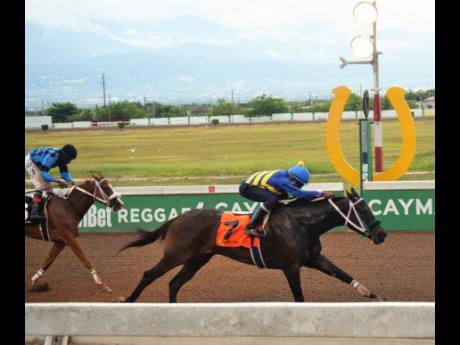 Anthony Minott
Go Deh Girl, seen here beating stablemate Hoist the Mast will not have it her own way when she faces Double Diva over five and a half furlongs at Caymanas Park on Saturday.

RETURNING AT 110lb in Saturday’s SVL 21st Anniversary Trophy, Jason DaCosta’s DOUBLE DIVA will be a tough horse to beat at five and a half furlongs, unchallenged in four consecutive victories, and looking even better at exercise.

Though her last two walkovers were at seven furlongs, DOUBLE DIVA showed enough pace and finishing speed to suggest she will be comfortable stalking any splits set by the likes of GO DEH GIRL, who was an easy winner at five furlongs straight when last out.

Up a notch among open allowance/graded stakes company in an eight-horse field stacked with four of her stablemates, DOUBLE DIVA has a safe draw at stall seven, which will keep her out of traffic problems heading to the half-mile marker.

The pace will be more hectic than she’s accustomed to with GO DEH GIRL drawn against the rail and gunning to make all with 114lb. There’s also GOD OF LOVE, who is back on the round course after being outsped by GO DEH GIRL out of the straight.

DaCosta’s game plan hinges on EAGLE ONE and KING ARTHUR playing spoiler up front, keeping GO DEH GIRL and GOD OF LOVE honest while DOUBLE DIVA gets into stride with first-call Anthony Thomas.

DaCosta stacking the race with proven class horses, who might not be outright sprinters, puts GO DEH GIRL and GOD OF LOVE at a disadvantage. GO DEH GIRL prefers an unmolested lead, similar to GOD OF LOVE, who does best when dominating his races.

DOUBLE DIVA’s in-race splits prove she has a good turn of foot coming off the home turn, which will quickly put her within striking distance of the speedsters with two furlongs to run. She galloped a fast 1:06.1 at exercise last Saturday morning, bettered only by stablemate SHE’S MY DESTINY’s 1:05.4.

Gary Subratie’s DUKE is the proven run-on sprinter in the line-up. He was mowed down by KING ARTHUR at six furlongs in May and was expectedly outsped out the straight, finishing third with 126lb behind GO DEH GIRL and GOD OF LOVE on last.

Though he’s a formidable foe at 114lb, relishing a collapsing pace, DUKE could get caught in traffic from stall three, costing him first run on the leaders, which DOUBLE DIVA will certainly capitalise on.