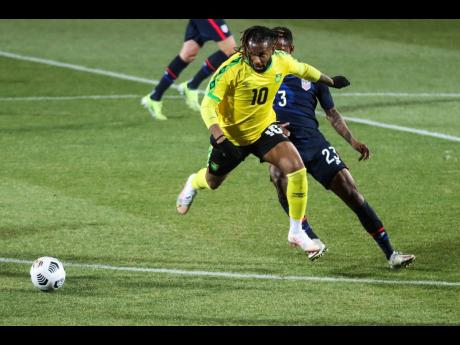 AP
Jamaica’s Kasey Palmer, foreground, duels for the ball with USA’s Kellyn Acosta during an international friendly match between the United States and Jamaica at SC Wiener Neustadt stadium in Wiener Neustadt, Austria on Thursday, March 25, 2021.

REGGAE BOY Kasey Palmer, who made his debut for Jamaica last year, has joined Coventry City from English Championship rivals Bristol City for an undisclosed fee after struggling to nail down a place with the West Country outfit.

The 25-year-old midfielder has agreed on a three-year contract with the Sky Blues, who finished 12th last season, and said he is happy to have completed the transfer.

Palmer, who made only eight appearances for Bristol City in 2021-22, the last in January, is Coventry’s first summer signing. Bermuda captain Nahki Wells was a teammate of Palmer at City.

“He is a player with great technical and creative ability,” Coventry boss Mark Robins told the club’s website.

“Kasey will add further quality to our squad, and brings much experience at this level too.”

Palmer played for England up to the Under-21 level, but won a full international cap for Jamaica against the United States in March last year, a game the Reggae Boyz lost 4-1.

“Since the first time I spoke with the manager and spoke with my old coach Adi [Viveash], I’ve been keen to get it done and get here,” Palmer said.

“I pretty much knew from doing my research and after speaking to him, he confirmed the style of play and how much I would be involved and be a part of his plans.

“The manager wants to play good football, play out from the back and play through the thirds with the number 10s getting in the pockets.”