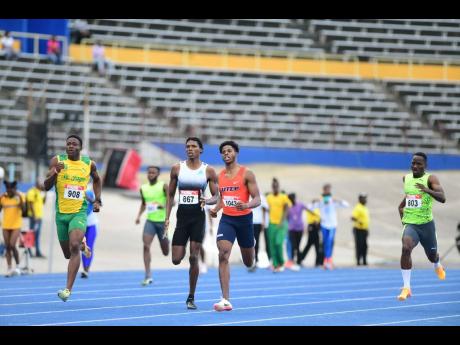 Gladstone Taylor
Jevaughn Powel (second right) goes for a stroll to win his Men's 400-metre first-round heat at the JAAA National Senior and Junior Athletics Championship inside the National Stadium earlier this evening. At right is Rusheen McDonald and at left is ST Jago's Gregory Prince. In the centre of the picture is Jeremy Bembridge.

Jevaughn Powell set the early pace in the Men's 400m, advancing to the semi-finals at the JAAA National Senior and Junior Athletics Championships this afternoon.

Powell clocked 45.56 seconds to win his first-round heat ahead of Class One ISSA/GraceKennedy Boys’ and Girls’ Athletics Champion Gregory Prince, who was second with a personal best of 45.73. Former national champion and national record holder Rusheen McDonald was third in 45.82.

The semi-finals are scheduled for tomorrow at 6:55 p.m