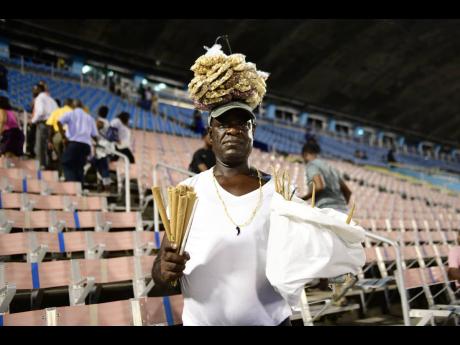 Spectators who flock to the National Stadium to enjoy major sporting events usually rely on the vendors in the stands to sell them snacks to meet their food needs.

Nuts are a popular snack consumed by spectators and Paul Jones has been travelling from Montego Bay to the National Stadium in Kingston, for more than two decades, to meet the demands of spectators at major sporting events who like nutty snacks.

“I have been coming to the stadium to sell peanuts from as far back as 1998. From the Reggae Boyz qualified for the World Cup,” Jones said.

He said the spectators are fans of the traditional snacks as he sells peanut cakes, almonds, cashews and raw peanuts.

Jones said he started selling peanuts from as early as age 12 and it has been his profession since, helping him to feed himself and his family.

“This has been my profession for a long time and it has helped me to send my daughter to high school and I am sending her to college,” Jones said.

He said although he sells in the streets when major sporting events are not happening at the National Stadium, these major events give him a boost in sales and profit.

However, Jones said having to pay a vendor registration fee of $5,000 to sell at the stadium and the increasing cost of items because of the coronavirus pandemic have forced him to increase the prices of his products. This has affected his sales.

“Some people buy it and some don’t,” he said.

Despite this, he said he expects his sales to improve as the championships goes along while adding that he will continue to sell at the National Stadium during major sporting events.