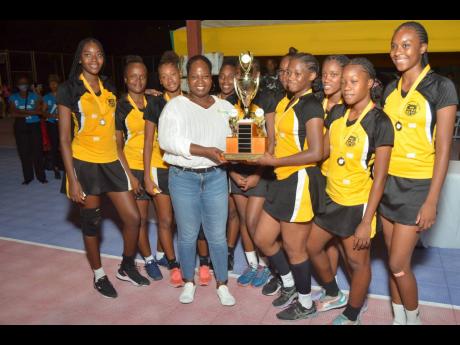 Tricia Robinson, president of Netball Jamaica, has hailed the overall running of the Supreme Ventures Divisional Netball League after the competition ended on June 18 with a presentation ceremony. More than 40 teams took part in the competition.

“We have come a long way, and, as such, we have to applaud the passion, commitment, and tenacity of our affiliates, staff members, players, managers, coordinators, technical staff, umpires, coaches, volunteers, and everyone else who supported the sport. A wonderful season has just passed,” Robinson noted.

In the Major League championship, Mico ‘A’ copped first place, earning 49 points, with team Tivoli close behind with 43. The Ravens were third with 36.

The Minor League was conquered by Alpha ‘B’, who earned 27 points, 10 points more than XLCR Eagles, who tallied 17, and Marchelette made it through to third place, tallying 21 points.

Robinson added that the championship has given the youngsters the opportunity to shine and happily announced that the Sunshine Girls will tour New Zealand in September and participate in the Fast Five Tournament in November.

She expressed that “thinking big” and forming “big partnerships” have been a rewarding strategy as the sport was able to rise to the next level.

“We are fully aware that if we want the sport to continue to thrive towards commercial independence, maturity, and self-reliance, sustainable partnerships had to be formed, and this was reflected in our partnership with Supreme Ventures,” she expressed.

Chloleen Daley-Muschett, corporate communications and public relations manager at Supreme Ventures, said that her company will continue its support of the sport because of its importance to national and youth development.

“We have a long history of supporting netball, therefore, we are delighted that we can keep doing so. We have found that these kinds of competitions will enable young athletes to continue the tradition of netball in Jamaica at the senior level. Well done, Netball Jamaica, I must say, for sticking with it and making sure that this thrilling sport keeps its place in Jamaicans’ hearts and on the international stage. A special thanks to the competition’s organisers as well,” Muschett said.