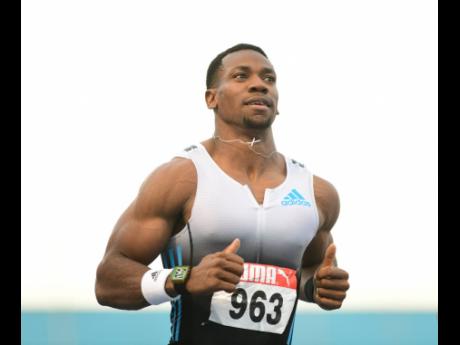 OUTSIDE OF a long-awaited return to his best form, nobody understood the reason former World 100-metre champion Yohan Blake was so full of emotion after winning the men’s 100-metre title at the JAAA National Senior and Junior Athletics Championships on Friday night.

Unbeknown to the public, Blake’s father was in hospital, having suffered a stroke prior to the start of the four-day event.

Blake, who won the world 100m title in 2011, clocked a season’s best 9.85 seconds to beat Oblique Seville, 9.88, while Ackeem Blake finished in a personal best time of 9.93 at the National Stadium.

Blake told The Sunday Gleaner that the last few days had been very difficult for his family and he wanted to dedicate the victory to his father.

“It really means a lot to me, my father got a stroke a couple of days ago and I just came out here to do it for him,” said Blake.

“I have been in disarray all week and I have just been keeping strong,” he said.

That disarray translated to breaking the 10-second barrier on the first day of Trials, running 9.93 to announce a welcomed, even if unlikely return to his best form.

“There were a lot of emotions coming into this event for my family because it was just tough, but I just held it together and put it behind me and did it for my father,” Blake said. “I think that will lift their spirits because they have been waiting for this moment and I just want to thank God.”

Blake was out of the blocks very quickly before asserting himself in the middle of the race. However, he did come under some pressure from Seville, who, at the time, was the fastest Jamaican this season with 9.86, but showed strength in staying ahead of his younger rival for the victory.

Blake, who is coached by former national representatives Gregory Little and Michael Frater at the Titans Track Club, pointed out that he has been working very hard on execution of his race all season. It is now paying off.

“I am feeling good about this win because I have been working all season on my execution,” Blake said. “Sometimes you just keep on believing in yourself and never doubt yourself. My season has been going good over in Europe and my team just kept on working on the last part of my race and you could see it tonight,” he said.

He added: “My coaches Gregory Little and Michael Frater have been working on my last part of my race and finishing and running some 110 metres really hard and it is paying off.”