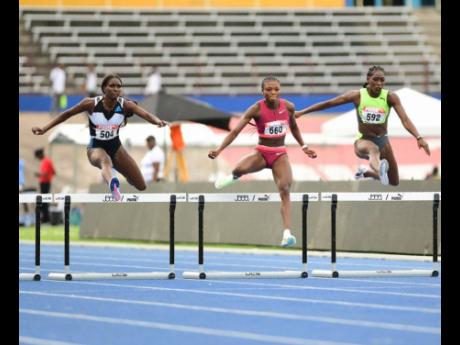 GladstoneTaylor
Rushell Clayton (left) competes in a women’s 400-metre heat at the JAAA National Senior and Junior National Athletics Championship inside the National Stadium. Also in the race are Andranette Knight (centre) and Shiann Salmon.

A YEAR ago, World Championship bronze medallist Rushell Clayton’s 2021 season ended with an injury and, with it, her chances at making the Tokyo Olympic team.

She has reversed that disappointment with qualification to the World Championships in Eugene, Oregon, her second major championship team after clocking 54.20 seconds to finish third in Friday’s final of the women’s 400-metre hurdles at the JAAA National Senior and Junior Championships.

Janieve Russell would retain the national title in 53.63 while Shian Salmon was second in 53.82.

The relief and the emotions were palpable for Clayton after a difficult year, which started when she pulled up at the NACAC New Life Invitational in Miramar, Florida, in June of 2021. She would withdraw from the National Championships that year and would not race again.

Clayton said that her faith in God and her faith in her coach Reynaldo Walcott of Elite Performance made the difference for her return to the World Championship stage.

“It’s very emotional because the journey has been rough. To be out for an entire year and to come back and make the team, that’s just God. That’s just God! I’m still recovering. I’m still fighting,” Clayton said.

“This is my fifth race. To run five good races and I am getting better at each one, that’s just amazing. I have to give thanks to coach (Reynaldo) Walcott and his patience and just God.”

Clayton joined Walcott’s camp for the 2022 season, after years under Okeile Stewart, who coached her to that 2019 World Championship bronze medal in a personal best of 53.74 in Doha.

Her 54.20 clocking on Friday at the National Stadium was a new season’s best for Clayton, representing the progress she has made this year.

Clayton said the struggles she had to endure last year have made her second senior championship qualification more meaningful.

A RACE AT A TIME

“As I always do, I take it a race at a time, a step at a time. I am just going to continue to push, give God the glory. Trust Coach Walcott, trust the process, trust my management team,” Clayton said.

“It has just been an amazing journey and I am looking forward to going even further.”

Clayton believes she can repeat the form that saw her grab a bronze medal in Doha, but is mindful that there are still things she has to improve on three weeks before the championships begin on July 15.

“There is never a perfect race. There is still so much to work on. When I go back into practice, it’s just to get the rhythm right, get the hurdling technique right and just run home,” Clayton said.