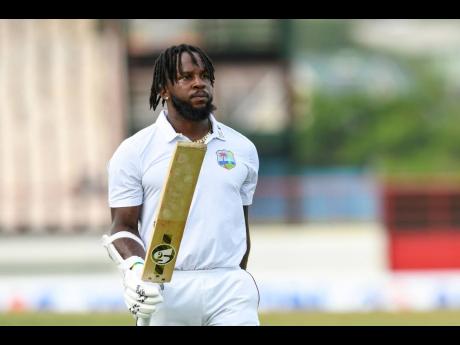 CWI photo
West Indies allrounder Kyle Mayers waves his bat to supporters at the end of the second day of the second Test against Bangladesh at Darren Sammy Cricket Ground in Gros Islet, St Lucia yesterday.

IF THERE is one opposition in international cricket that Kyle Mayers loves, it is Bangladesh.

The left-hander scored his second Test century against the side to put the West Indies in a commanding position following Day Two action in the second Test in St Lucia yesterday.

Mayers will resume today’s third day on 126 with the West Indies nicely positioned on 340 for five for an overall lead of 106 runs. Resuming with him will be wicket-keeper Joshua Da Silva, who is not out on 26.

It was a day when the West Indies started brightly, then relinquished that good start just before lunch, before Mayers and company took over to wrest the back.

Captain Kraigg Brathwaite and his opening partner John Campbell made sure the Windies continued their good showing from Day One, as they took their position of 67 without loss to three figures, with the pair playing positively in the first session of the day.

After getting to the hundred mark, John Campbell’s would be the first wicket to fall, gloving a Shoriful Islam delivery down the leg side to the keeper for a well-played 45.

Brathwaite stroked seven fours while using up 103 balls to get to his half-century. However, he would fall soon after for 51 with the score on 131.

Then it was the Bangladeshis who decided to take over precedings, snapping up two more quick wickets to leave the hosts in a tricky position at 132 for four.

Raymon Reifer played a couple of handsome strokes to get to 22, but he was the first of two victims for pacer Khaled Ahmed, who also sent back Nkrumah Bonner for a duck to ensure the Jamaican’s wretched form in the series continued.

After the luncheon interval, it was a different ball game, as vice-captain Jermaine Blackwood and Mayers posted a solid century stand.

Mayers drove, cut and pulled his way to a half-century off just 75 balls with seven fours and a six to take the host to tea at 248 for four and a 14-run lead.

After adding 116 runs for the fifth wicket, Blackwood was also looking certain of a half-century. However, he would fall lbw to spinner Mehidy Hasan 10 runs short of the milestone.

Mayers would, however, find another useful partner, Da Silva. They would further frustrate the visitors with an unbroken 92-run sixth-wicket stand.

During that partnership, Mayers ably brought up his second Test century with a six, to the delight of the Windies dressing room. He has, so far, faced 180 balls and hit 15 fours and two sixes.

“It was just a matter of fully committing to what I do. I was very decisive in terms of stroke play, and I was positive when I decided to attack and gave it my all. When I defended, I did the same and it was all about making the right choices,” said Mayers.