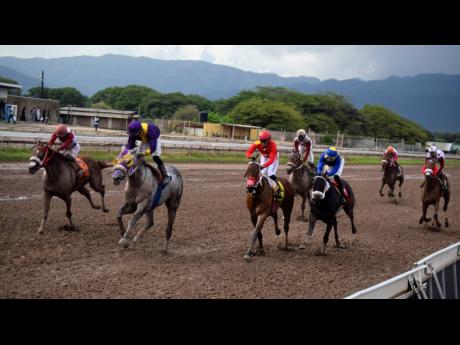 DANE Dawkins yesterday reminded champion jockey Anthony Thomas there will be no easy path to a fourth riders’ title at Caymanas Park, closing a two-timer with a stirring finish aboard Gary Subratie’s 8-5 chance, DUKE, to upstage his rival’s 6-5 favourite, DOUBLE DIVA, in the SVL 21st Anniversary Trophy at five and a half furlongs.

Dawkins, who had outbattled Thomas the previous Saturday, using JORDON REIGN’S to nab LURE OF LUCY in the Information and Communication Technology Department Cup, again showed off his skills in a trophy showdown with the champion jockey from three and a half furlongs out while both were outsped near the rear of the seven-horse field.

Spinning wide into the lane alongside each other while GO DEH GIRL and GOD OF LOVE continued their from-the-gate battle on the lead with EAGLE ONE trying to reel them in from down along the rail, DOUBLE DIVA and DUKE took aim at the leaders as a team, driving forward approaching the furlong pole.

However, it was the six-year-old grey, local-bred DUKE, who found a fifth gear, quickening away from the imported four-year-old filly inside the last half-furlong, beating her by three-quarter length in 1:05.2 on a wet-but-fast track, sped up by a downpour before the sixth race, which was run in sloppy conditions.

Dawkins, who started the afternoon locked on 45 winners with Thomas, had won the previous event on a chance ride, replacing Raddesh Roman aboard Patrick Lynch’s SHEBOOM, who he had racing surprisingly early at six furlongs, picking up the lead halfway the event.

In-form Dawkins eventually survived a stewards enquiry for drifting tactics aboard SHEBOOM while fending off the challenge of 2-1 favourite LORD OF AJAHLON ridden by apprentice Shane Richardson.

Dawkins’ double to grab the lead atop the riders’ standings overshadowed Philip Parchment’s three-timer on the 11-race card, pushing him two clear of winless Thomas heading into this afternoon’s 10-race meet.

Parchment won the first two events astride ZION and DUKE OF SPRINGS and returned in the sixth aboard 6-1 chance DILIGENT to rush past longtime leader HECANDANCE a half-furlong out before THUNDERSTRIKE and BRUCE WAYNE stormed home wide in a cavalry charge for second and third, respectively.

Telling upsetters, mild and stunning, starting from LOOSE BALL at 6-1 in the fourth event, wreaked havoc on form players trying to collar the Ketch 9 mandatory payout.

GILBERT winning at 3-1 with veteran Everton Miller in the fifth, followed by DILIGENT and SHE BOOM, topped off by AWESOME RICH and QUIET BOSS closing the programme at 6-1 and 15-1, respectively, resulted in a payout on seven of nine, two winning tickets each picking up $2.75 million.

The upsetters on the second half of the card also forced a $3.3 million Twilight 6 carryover to this afternoon, joining the $9.7m at which the Reggae 6 mandatory payout will open the betting for first post at noon.