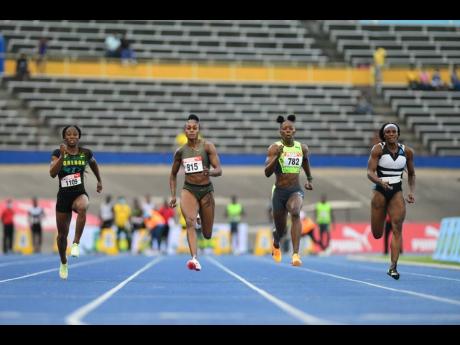 Gladstone Taylor
Kemba Nelson (left) running in the semi-final of the women’s 100 metres at the JAAA National Senior and Junior Athletics Championships at the National Stadium on Friday. Also in the photo are (from left) Elaine Thompson Herah, Shericka Jackson and Remona Burchell.

TO HER delight, University of Oregon graduate Kemba Nelson’s 2022 ‘redemption season’ ended in exultation after she secured her first senior championship team and announced herself to the professional ranks on Friday.

Nelson missed out on the Tokyo Olympics last year, finishing seventh in 11.16. And things did not start well on Friday after an issue with the start left the athletes waiting for an eternity before the race got underway.

Nelson, who depends on a fast start, with a less-than-stellar record at the end of races, was up against it.

“My finish is not really the best part of my race, so I knew I had to get the start (right). I didn’t even know where I was during the race. I was shocked. But I knew I was in it, and I am grateful and happy,” Nelson told The Sunday Gleaner.

Nelson’s comeback tour also included strong performances in her final collegiate season where she finished second in the 100m outdoor final in 11.02 seconds, improving from her fourth-place finish last year.

At Trials, Nelson clocked back-to-back sub-11 times (10.98 in heats and semi-finals) en route to the final, where she crossed the line behind Jackson.

The two enjoyed a memorable moment at the end, hugging in celebration of the two feats. Jackson was winning her first national title over the sprints.

Jackson, the Tokyo Olympic games 100m bronze medallist, recalled her conversation with Nelson the day before the race where Nelson said she “would catch her at 60m”. Jackson says Nelson has great potential, having broken through this year.

“It’s just a happy feeling to know that she came out here and ran a massive personal best. She ran a personal best on Jamaican soil. I’m just happy for her. She is definitely going places,” Jackson said.

Nelson will return to familiar surroundings in Eugene and specifically at Hayward Field, having competed there for the University of Oregon.

For her, qualification was a declaration of intent.

“I named this season redemption season for a reason. Last year was a disappointment here at the championships. I came here to redeem myself and just to tell the world that I am here,” Nelson said.