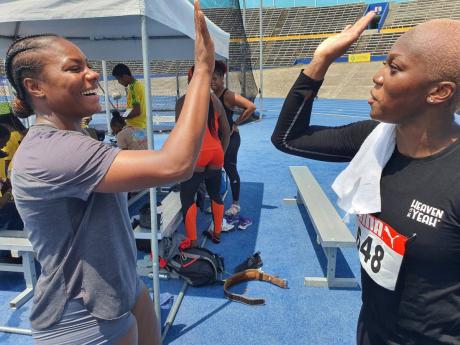 The final day of the JAAA National Senior and Junior Championships began with a riveting battle in the hammer throw, with Nayoka Clunis emerging as the winner. Clunis had to rally to beat the consistent Erica Belvit, and though they both missed the...

The final day of the JAAA National Senior and Junior Championships began with a riveting battle in the hammer throw, with Nayoka Clunis emerging as the winner. Clunis had to rally to beat the consistent Erica Belvit, and though they both missed the World Championships qualifying standard, Clunis and Belvit have their eyes on the Commonwealth Games.

Belvit, born to Jamaican parents in the United States, bolted from the blocks with a first-round mark of 66.21 metres. While Clunis adjusted to the traction in the throwing circle, the 23 year-old Belvit boomed a 66.64m second effort. Then Clunis steadied with a 62.11m toss in round three and a fast spinning launch in round four. That taped at 67.35m, just short of her personal best 67.40m from last year.

“Today was a bit difficult because the ring is a little bit slower than it’s normally been, so I had to adjust my technique a little bit driving the right side a lot more, and with an inflammation in my right knee, it’s a lot more pressure on the ground. So it took a while to find my rhythm. Even though I didn’t, I got one throw in. So I’m grateful for that,” said the athlete who previously triumphed in 2018 and 2019.

“It feels good to get the title back in my name,” she added. “I haven’t been having a great championship in the National Stadium for a couple years, so it’s good that I can come out here and get 67 metres.”

Belvit has the best throw by a Jamaican this year at 67.66m, but she wasn’t disappointed.

“I’m happy that I didn’t just, like, flat out get discouraged or anything like that there for today. I came out, did my best,” she said.

The average distance of her four fair throws was 65.66m.

June 26 was the last day for qualifying marks to be counted for next month’s World Championships, but Clunis and Belvit are looking forward to the July 30 commencement of the Commonwealth Games. Belvit’s coach, Wilfredo de Jesus, thinks she could challenge.

“I’m just hoping we can just get her maybe to the Commonwealth Games, where I think she has a really good shot at medalling. World Championships is always a goal, and I do think in the next coming years, she’ll definitely be a force in the world,” he predicted.

Belvit wants to go to Birmingham, England, for those Games.

De Jesus thinks highly of Clunis, too, having seen the Excelsior High School past student during her college days in Minnesota and Tennessee.

“They’re both incredible athletes. I’ve had the opportunity to watch Nayoka quite a bit in the NCAA system, and she’s done incredible things, and I’m sure she’s going to continue doing that as well,” he said.