Tapper optimistic about fixing mistakes ahead of World Champs 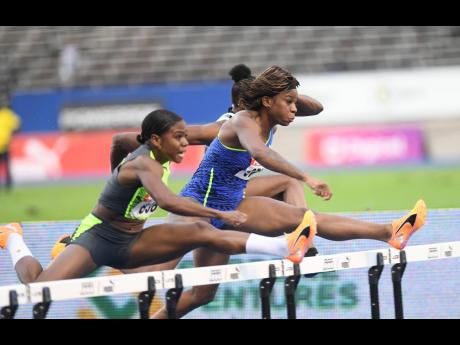 Ricardo Makyn
Megan Tapper (left) and Britany Anderson (right) clear the last hurdle in the women’s 100m hurdles final at the JAAA National Senior and Junior Championships on Sunday at the National Stadium. Anderson won in 12.53 seconds while Tapper was second in 12.60.

It may be far from the easiest of seasons for Tokyo Olympics 100 metres hurdles bronze medallist Megan Tapper, however, she is hoping that the pieces will fall into place between now and the July 15 start of the World Athletics Championships in...

It may be far from the easiest of seasons for Tokyo Olympics 100 metres hurdles bronze medallist Megan Tapper, however, she is hoping that the pieces will fall into place between now and the July 15 start of the World Athletics Championships in Eugene, Oregon.

Tapper was dethroned by Britany Anderson for the national women’s 100m hurdles title on Sunday’s final day at the JAAA National Senior and Junior Championships. In a tightly contested final, Tapper booked her spot for next month’s World Championships behind Anderson, who clocked 12.53 to win the event. Tapper was second in 12.60, equalling the season’s best that she set in the preliminary round on Saturday. Former world champion Danielle Williams was third in 12.66

Tapper’s results have been mixed this year after opening her season in April with a 12.80. She has only finished in the top three twice this year and struggled on the European circuit. This included not finishing the final of the Liese Prokop Memorial meet in Austria in May. She said that being able to get herself in the right physical shape to execute properly has been an obstacle.

“My biggest challenge this year was to get my body in the right place to run proper races. I have been struggling through the season to get that particular thing done. But I think I am getting better at it and I think there is more to come from me,” Tapper told The Gleaner.

Tapper’s season’s best is seven-hundredths of a second away from her personal best of 12.53, which she did in Tokyo last year en route to that bronze medal, and is the 15th fastest time in the world this year. In the battle between her and Anderson for the national title, Tapper, said that a dip in her form during the race gave Anderson the opening she needed.

“That was my race to lose and I didn’t keep my form as good as I could have. Britany being the formidable opponent that she is, saw the opportunity and took it. But in all, we give God thanks. The season hasn’t been the easiest,” Tapper said. “But God gave me the strength to come out here and put on the show that I put on, and I am grateful for that.”

With three weeks to prepare for the World Championships, Tapper said her national championships campaign will give her the perfect fuel to fine-tune her technique, believing that there is a chance for Jamaica to grab a medal in a formidable field.

“What will give me confidence is to keep training and ensure that the weak parts of my races that I had in these championships, I fix for Oregon. I am pretty close to fixing them. I always said that races are not run on paper,” Tapper said “Anything can happen especially when hurdles are involved. On the day, let’s see who has it. “