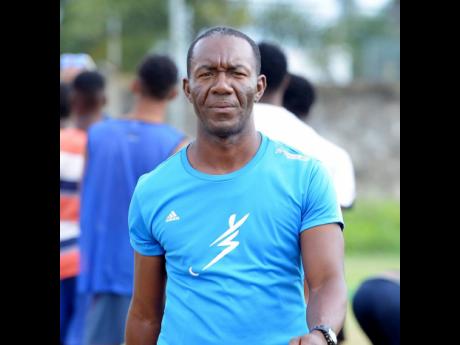 THE DEVON ‘Pablo’ Anderson era at Holy Trinity has officially come to a close after the school parted ways with the highly rated coach earlier this month and unveiled the new coach, Nicholas Stewart, on the school grounds on Monday. Stewart, who...

THE DEVON ‘Pablo’ Anderson era at Holy Trinity has officially come to a close after the school parted ways with the highly rated coach earlier this month and unveiled the new coach, Nicholas Stewart, on the school grounds on Monday.

Stewart, who was on hand to receive training gear and equipment donated by the past-students’ association, coached Camperdown’s Colts team for more than 10 years, Super and Major League teams such as Olympic Gardens, Meadforest, Pembroke Hall, Molynes and Allman/Woodford, who he won the major league with, and Waterhouse’s u20s, who he also won with.

In Stewart, the school is confident it has found the ideal replacement to build on what Anderson leaves behind.

Stewart is not daunted by the task either and expects to be ready when the 2022 schoolboy football season kicks off.

“There is no pressure. It comes with the territory. It is part of the game. Most teams I have coached needed something changed or to go to another level. I am used to this and with the two coaches beside me, Delano Campbell, a winner with Boys’ Town, and Damoney Kildare, a development coach, there is no pressure. We will just focus our heads together and try to get the best out of these kids,” he said.

His greatest challenge is the fact that no programme existed in the school for nearly two years, but he assured he would prepare one to get the group ready.

“For the first week and a half, we will be doing some assessment of what we have and where they are and formulate a programme to lead up to the Manning Cup.

“I am a champion coach and it is all about the title. But we are tempering our expectations. The school has given us a goal to get out of the group and anything else is a plus,” he said.

Principal Carl F. Clarke said it was a struggle to finance the participation of the team last season, and that a petition to the past students for assistance bore fruit and the aim is to lift the coveted Manning Cup in five years.

“When we engaged coach Nicholas Stewart we said, we have a name and a tradition in football and we are expecting that you at least take us to the second round and if possible the semi-finals.

“We are in a rebuilding mode and we expect that as we have done in the past, we will be a force to reckon with in the 2022 Manning Cup.”

Meanwhile, past-students’ president, Francis Reid, said all efforts were made to retain Anderson, who opted to move on.

“The position was handed to coach Anderson but he is at a different stage. We are all very disappointed because we were looking forward to him continuing his coaching.

“So we had to go and hunt for a coach and we decided on Mr Stewart and when I did my research on him it was all positives, so it was a really easy pick,” he commented.

The team started preparation for the season on Monday.