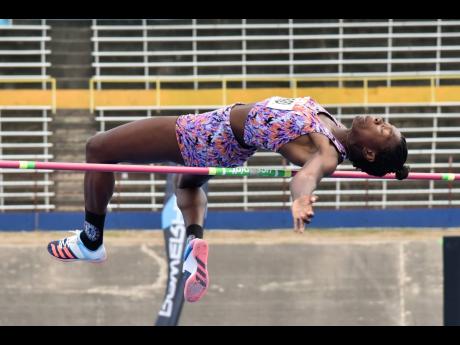 Kenyon Hemans
High jumper Kimberly Williamson clears 1.88 metres to win the national title on the opening day of the National Senior and Junior Championships at the National Stadium last Thursday.

Eleven years later at last week’s National Championships, the 28-year-old Pan-American Games bronze medallist captured her seventh title and almost certainly punched her ticket to the US city of Eugene, for the World Championships in two and a half weeks’ time.

Her victory over Jamaican record holder Lamara Distin is part of a resurgence that is anchored in a battle to find the perfect body weight for high jumping.

More powerfully built than most of her peers when she won the 2016 NCAA title, Williamson is a sleek figure these days.

“My weight is something I’ve struggled with a great deal and a lot of it, I realise, was because of stress and anxiety and just things that I was struggling with and the minute I was able to let those go and just be me, I was able to, one, drop the weight, and, two, be consistent with keeping it off,” she said.

This year, she has raised her personal best from 1.91 to 1.93 metres and that will give her the opportunity to jump in Eugene.

Only eight women have met the World Championships qualifying standard of 1.96 metres, and with Williamson sharing 15th place on the 2022 World Athletics performance list, she can start packing.

“This year has been a great year. God has blessed me with a tremendous support system and great opportunities and I was able to take some of the pressure off and just focus on track and it’s paying off.”

After a short stay at The University of the West Indies, Williamson moved to Kansas State University. She made a big decision to return to Jamaica after the 2019 Pan-American Games and to the counsel of the man who coached her at Edwin Allen, Marlon Gayle.

“I’m a Christian,” she declared.

“… and I live by faith so every decision I make, I make believing that God is going to come through for me so everything is just walking in faith, trusting that it’s going to work out.”

Her summer is full with the Commonwealth Games in Birmingham, England, and the NACAC Senior Championships in the Bahamas to follow Eugene.

“What’s next is the Championships. I have World Championships coming up, Commonwealth and NACAC and those are just my main focus for this year.”

Distin will be in Eugene too, following her record jump – 1.97 metres – and her indoor and outdoor NCAA championships for Texas A&M University.

In 2017, Williamson competed at the London World Championships placing a non-advancing 17th in qualifying.