Young Reggae Boyz on the doorstep of World Cup berth 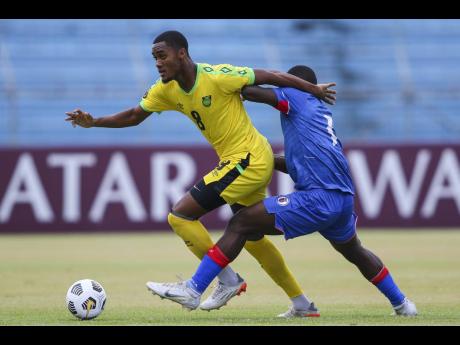 Concacaf.com photo
Christopher Pearson shakes of his Haitian marker during a Concacaf U20 Men’s Championship round-of-16 game at the Olímpico Metropolitano in San Pedro Sula, Honduras, on Monday.

THE LAST time Jamaica were on the world stage at the Under-20 level was in 2001.

The young Reggae Boyz could end the two-decade wait for another Under-20 World Cup appearance should they beat the Dominican Republic this evening in their Conacaf Under-20 Championship quarter-final match at the Olympico Metropolitano in San Pedro Sula in Honduras at 6:00 p.m.

Both countries needed results from their final games to make it out of the group stages and since then have grown after their respective knockout victories.

Jamaica’s road to the quarter-finals has been rocky, needing a late penalty to force a 1-1 draw with Costa Rica in their opening game and then losing 5-0 to hosts Honduras, playing an entire half with 10 men.

Jamaica won their final group game against Antigua and Barbuda, 2-0, to secure their qualification and followed that with a 2-1 win over Haiti, thanks to goals from Jahmari Clarke and Tarick Ximines.

After the win against Haiti, Ximines said it was important for them to continue the togetherness and team chemistry that have helped them on their journey, a journey he hopes will lead to the 2023 tournament in Indonesia.

“One more step and we are in the World Cup. All we have to do now is stick together and keep working hard,” Ximines said.

Clarke is Jamaica’s leading scorer in the tournament, scoring three of the team’s five goals so far.

Dominican Republic’s run to the quarter-finals has been highlighted by coming back from deficits, in their quest for a first-ever Under-20 World Cup appearance.

In their final group game against St Lucia, trailing 2-0, they scored twice in the final minutes to get a crucial point to guarantee qualification to the knockout round. They also came back twice in their round-of-16 game against El Salvador, winning 5-4.

The opportunity in front of the Boyz is not lost on former national youth player Alex Thomas, who was a part of the Jamaica team that played in their first and, to date, only Under-20 World Cup (formerly the FIFA World Youth Championship) tournament in Argentina.

Thomas, who has coached at the schoolboy and at the Jamaica Premier League level says the attitude shown after the Honduras defeat gives them the confidence to weather any obstacles.

“That should give the boys some pride and a boost. We have been going under the radar after losing 5-0 to Honduras and we bounced back the way we have. We have nothing to lose. They are going to do well because bouncing back from that 5-0 loss, nothing can stop them,” Thomas said.

The winner will face either Guatemala or Mexico in the semi-finals.