Another dream has ended 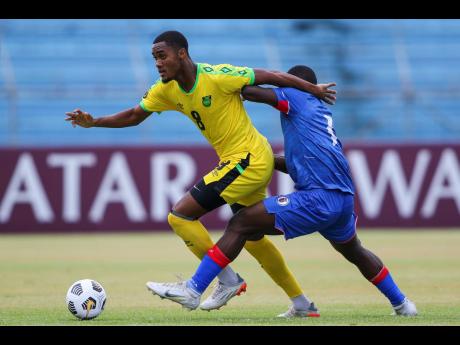 Concacaf Photo
Jamaica’s Christopher Pearson carries the ball during their game against Haiti in the Concacaf Under 20 Championship at the Olimpico Metropolitano stadium in San Pedro Sula, Honduras on Sunday.

JAMAICA’S UNDER-20 Reggae Boyz were 90 minutes away from history but eventually were a goal short of destiny, crashing out of the Concacaf Under-20 Championship at the Olímpico Metropolitano in San Pedro Sula last night.

The young Reggae Boyz lost 1-0 to the Dominican Republic, who, as qualifiers for this competition, had a fairy tale story of their own.

Between the two countries there had only ever been one World Cup qualifier, the Jamaicans back in 2002, but they never played like it.

In a first half where the Jamaicans were largely second best, the Jamaicans fell to a brilliant goal 10th minute from Angel Montes De Oca.

Montes picked up on a throw that bobbled loose in an innocuous area of the field.

All of a sudden, it was dangerous as Montes lifted the ball over an onrushing defender before striking a vicious volley to the right of a hapless Coniah Boyce-Clarke.

And that was all she wrote.

In the second half, Jamaica competed better in the middle of the field, winning more duels with the Dominican Republic players though they still looked disjointed in attack.

Coach Marcel Gayle waited for his team to get it right before making a slew of changes between the 72nd and 85th minutes of play.

The changes made a difference as the Dominican Republic were finally pushed back.

They no longer had time on the ball, and their play became erratic.

The 15 minutes of pressure did not yield the results Gayle would have hoped as Chad James, who had replaced Tyler Roberts, failed to put together any serious challenges for the Dominican Republic.

Kobi Thomas, who had come on for Jahmari Clarke, looked lively and put together some good attacking play.

The biggest chance of the game for the Jamaicans, though, would come just before Clarke’s substitution after he took a cross in the chest and turned into the box. A desperate tackle thwarted his attempt to shoot, with Dominican Republic goalkeeper Xavier Valdes at his mercy.

That is as close as the Jamaicans would get.