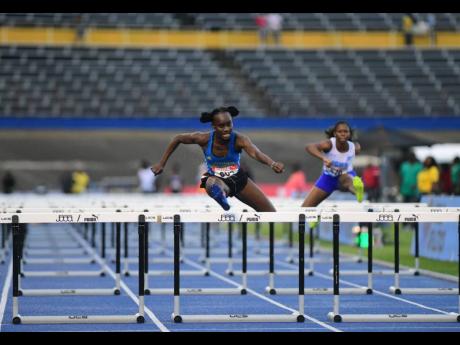 Gladstone Taylor
Hydel High School ace hurdler Kerrica Hill on her way to a dominant victory in the Girls’ Under-20 100-metre hurdles inside the National Stadium on Sunday.

HAVING CLOCKED a personal best time to win the Under-20 100m hurdles at the JAAA/National Junior and Senior Championships at the National Stadium last weekend, Hydel’s Kerrica has now set her sights on the U20 world record. The 17-year-old Hill,...

HAVING CLOCKED a personal best time to win the Under-20 100m hurdles at the JAAA/National Junior and Senior Championships at the National Stadium last weekend, Hydel’s Kerrica has now set her sights on the U20 world record.

The 17-year-old Hill, who has been having an outstanding season, was in immaculate form at the Championships, winning the event in 12.98 seconds to erase her previous best time of 13.29.

Hill, whose new personal best is a world-leading effort, was flawless in negotiating the barriers on her way to dismantling the field.

Her countrywomen Britany Anderson is the world record holder in the event with a time of 12.71.

The Corey Bennett-coached Hill said her execution will be key in her quest to running 12.7 at the World Under-20 Championships in Cali, Colombia, from August 1-6.

“I just have to get the technique and get faster, and once I execute properly throughout the race then I know that I can achieve it,” she said.

“You just have to stay relaxed throughout the race and execute properly,” Hill said.

She added that she was a bit surprised with the time she ran at the National Championships because of the wet conditions.

“I am feeling pretty good after this run, but I never expected this time because of the cold weather conditions, but I am happy with my performance,” she said.

“But after the Carifta Games, I went to training and I fixed what I had to fix and so just came out here and executed and delivered,” Hill stated. The soft-spoken athlete pointed out that she is hoping to secure a medal for her country at the World Under-20s.

“The World Under-20 Championships is the aim and so I am just going to go out there and represent my country to the best of my abilities and hopefully to bring home a medal,” Hill said.