No CPL for Gayle, focuses on the 6IXTY 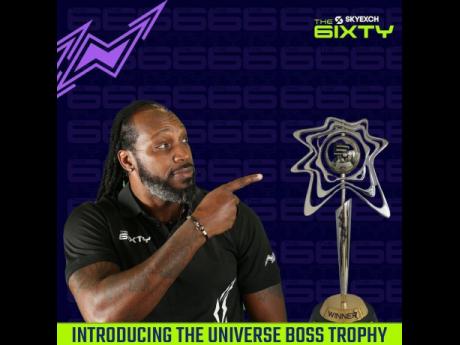 Taken from Intagram (chrisgayle333)
Chris Gayle promotes the Universe Boss Trophy teams will be vying for in the inaugural edition of The 6IXTY.

WEST INDIES batting star Chris Gayle will skip this year’s Caribbean Premier League (CPL) as he will instead focus on the region’s new 60-ball competition named the 6IXTY.

Gayle, brand ambassador for the tournament and in whose honour the trophy is named, said in a statement that he is “going for the shorter format this year”.

The 6IXTY, a joint venture between Cricket West Indies (CWI) and CPL, will see six men’s and three women’s teams competing in a 10-over tournament that will be played from August 24 to 28 at Warner Park, St Kitts.

The 10th edition of the CPL will start two days after the end of the new tournament, on August 30.

Under the rules of the 6IXTY, each batting team will have just six wickets, teams will lose a fielder if they bowl too slowly, and fans will vote for the timing of a “Mystery Free Hit”, where a batter cannot be dismissed by the bowler.

“I am genuinely excited about the current innovations in the 6IXTY and seeing how they play out. In particular, I am looking forward to the mystery team ball and hitting two sixes in the first 12 balls to unlock a third Power Play over,” Gayle said.

The teams will vie for The Universe Boss Trophy, and Gayle said it was “a great feeling” to actually have a trophy named after him.

“[It is] …something fantastic, and I am really and truly looking forward to it. I am sure people will ask if this is real, a trophy named for Chris Gayle. Yes, it is happening, and I am really happy about it. I am looking forward to all the innovations,” said the batting star, who has the most runs, most hundreds, most sixes, and the most scores of 50 or more in T20 cricket.