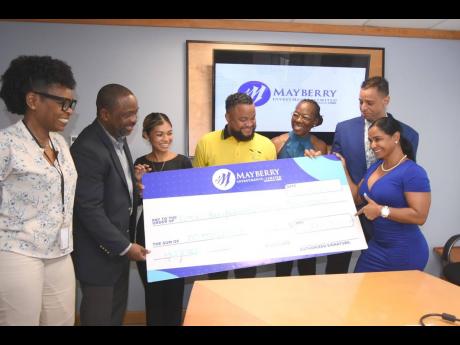 BUOYED by the return and its consequential opportunities for participants, key players Mayberry Investments, the Jamaica Olympic Association (JOA) and the Jamaica Body Building and Fitness Association (JABBFA) are expressing delight as the sport makes a competitive return this weekend with its big dance.

Since 2019, the Mayberry JABBFA National Championship has been forced off stage because of the pandemic and at the recent launch, Stephanie Harrison, Assistant VP of title sponsors Mayberry Investments, said they are excited at the impending resumption of the sport’s prime competition.

“We are ecstatic about the partnership with JABBFA and the renaissance of its National Senior Championships, which is geared toward exposing true raw talents, who will later contribute to our national pride and also geared toward promoting healthy lifestyles and wellness in Jamaica,” Harrison expressed.

“The pandemic has undoubtedly hindered our ability to conduct sporting competitions, and as such, we intend to proceed with maximum speed, hence this alliance,” she added, of their partnership with the JOA and JABBFA.

“Mayberry Investments Limited has long been supporting Jamaican sports development as part of its corporate and social duty. We ensure to keep up this mandate because we are aware of, and have first-hand experience, with the positive effects of sport in promoting community-building and contributing to the development of the country,” Harrison said.

With 80 competitors down to participate and 35 gyms represented, the national championship will take place today at the Courtleigh Auditorium, with a four-hour pre-judging segment leading off the programme from 10 a.m., and finals set for another four-hour set, from 7 p.m.

The championship is JABBFA’s main mechanism to promote wellness and well-being in Jamaica. A family-friendly event, it brings together fitness enthusiasts ranging from bodybuilders and powerlifters to mixed martial arts, wrestling and karate participants, personal trainers, group exercise instructors, competitive athletes and even the weekend warrior.

Ryan Foster, the JOA’s secretary general/CEO, underlined the JABBFA’s fit into its ‘Sport for All’ mantra.

“The JOA, under its Sport for All initiative, is extremely pleased to partner with Mayberry Investments in sponsoring the JABBFA National Championships 2022,” he said.

“Mayberry, a long-term partner of the JOA, has agreed under our agreement to invest $1.5 million in the National Championship, which will not only make the event a reality, but ensures that the sport will restart after the long lay-off because of the pandemic, and also secures the future generation of bodybuilding in Jamaica,” he affirmed.

Along with the championship, attendees will get the chance to meet fitness celebrities, discover new health and wellness products and services, plus free access to fitness classes and cooking demonstrations. And Kirk Frankson, vice president, JABBFA, noted the importance of rebuilding partnerships to support their efforts.

“In the initial post pandemic discussions, the JOA shared their commitment to working with all sporting associations to not only build back the structures and partnership with corporate Jamaica that existed prior to the pandemic, but to scale up these partnerships and share best practices for the resumption of sporting activities.

“This partnership with Mayberry Investments Limited will not only increase community participation, physical activity and deliver bodybuilding and fitness to the country, but is the fulfillment of the JOA’s commitment of ‘ensuring sports for all,” Frankson said.