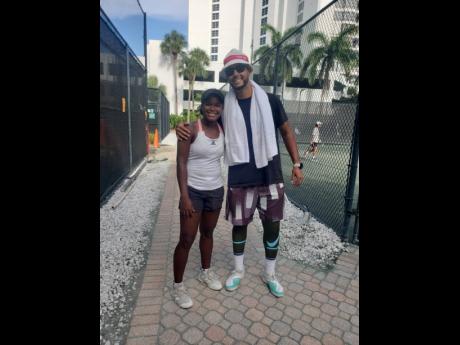 ONE OF Jamaica’s top junior tennis players, 14-year-old Alyssa James, flew the Jamaica flag proudly recently when she was runner-up in the USTA Florida Bobby Curtis Championships, which took place from June 11-15. She competed in the 16 and under...

ONE OF Jamaica’s top junior tennis players, 14-year-old Alyssa James, flew the Jamaica flag proudly recently when she was runner-up in the USTA Florida Bobby Curtis Championships, which took place from June 11-15. She competed in the 16 and under category.

The Bobby Curtis Championships is one of the top junior tournaments in the United States, and winners have gone on to become top players in the world.

James, who attended Hillel Academy, is now going to school in Florida, and is being coached by Othmane Garma, who was born in Morocco, but migrated to the United States when he was 14. He once coached former US Open winner Sloane Stephens.

She had a competitive run to the final, and in the round of 16 defeated Yael Saffar 6-0, 7-6(3). She dominated the early play, but her opponent made the second set competitive and it went to a tiebreaker, which James won comfortably.

In the quarter-final match, she met Bridget Chalich and won easily 6-1, 6-3.

Her semi-final against Isabella Aguiar was, however, a very close affair. She won the first set 7-6 (8) lost the second set 2-6 and in a very tight super tiebreak edged her opponent 13-11 in a game that had many long rallies.

In the final, James went up against the highly fancied Claire Shao, who cruised to an easy 6-3 win in the first set. James roared back in the second set, however, to win a hard-fought set 6-4. The super tie-break was close all the way, and produced some long rallies. Shao eventually prevailed 10-8.

Shao, afterwards, praised her opponent for a hard-fought match, said how nervous she was in the late stages of the game, and how relieved she was when James put the ball in the net to give her the winning point.