Road to the final 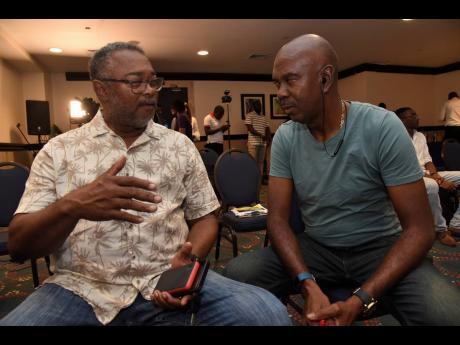 Ian Allen
Harold Thomas (left), coach of Dunbeholden football team, and Ludlow Bernard, coach of Harbour View, share a moment during a press conference to announce details of the Jamaica Premier League final between the teams at the Jamaica Pegasus Hotel in Kingston on Friday.

TO CALL the paths Dunbeholden and Harbour View took to get to today’s Jamaica Premier League (JPL) final, ‘contrasting’, is likely spot on.

The histories of the clubs are also miles apart, with five-year-old Dunbeholden enjoying just four at the top flight with no accolades to their name, while Harbour View have a decorated past, which includes four national titles and some of the best players the country has produced.

However, it was the less-recognised Dunbeholden who had the better regular season run, and qualified comfortably for the play-offs.

The St Catherine club had declared its intention to win the title from the 2020-21 season but the coronavirus pandemic disrupted that season and organisers had to truncate after a pause.

During this off period, while the fraternity waited desperately for the sport to return, the club lost its talisman, Tremaine Stewart, who collapsed and passed away while playing community football just months before the 2021 season.

The Harold Thomas-coached team just missed out on a play-off spot last term by a point to Harbour View. However, they had a fairly good start to this season, winning four and losing two of their first seven. They hit their stride following a win over Arnett in the seventh round, going on a seven-match winning streak and 10 games unbeaten, climbing to the top of the standing in the process.

They held top spot until the last few rounds, when they hit a slump, enjoying just one win in their last six regular-season games. The slump coincided with Thomas leaving the island for the entire month of May to tend to personal affairs overseas.

The team ended the standings in second on 44 points, five behind Waterhouse. Both secured places in the semi-finals.

Dunbeholden did not skip a beat in the first-leg semi-final, winning 1-0 against Cavalier. But they were made to sweat in the second leg, after Cavalier won 4-3 to send the tie to penalties, which they won 4-2 to book today’s date.

Harbour View, on the other hand, have had a Jekyll and Hyde season. The ‘Stars of the East’ took three matches to get their first win and after the first round had registered just four victories.

For most of the season, they fluctuated between eighth and sixth along with Portmore and Tivoli. The east Kingston side went into the final day needing at least a point, and they held today’s opponents to a 1-1 draw and turned back Tivoli and Humble Lion on goal difference to progress to the quarter-finals after all three finished on 28 points.

However, since the start of the knockout phase, Harbour View have been reborn. They outplayed and ousted the more fancied Arnett Gardens 8-7 on penalties in the quarter-finals after a 2-2 aggregate draw.

Then in the semi-finals, two wonder goals by super-sub, Nicholas Hamilton, gave them a 2-1 win over Waterhouse.

During the regular season Dunbeholden had the upper-hand on Harbour View, with a win and a draw. Dunbeholden are aiming to lift the title in their first final, while Harbour View are looking to claim their fifth.