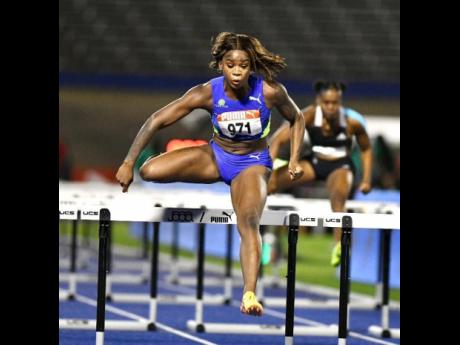 Ricardo Makyn
Britany Anderson in action at the JAAA National Senior Championships at the National Stadium.

With under two weeks to go before the 2022 World Athletics Championships in Eugene, Oregon, athletes will be stepping up their preparations in what is expected to be one of the most eagerly anticipated championships in recent years.

A number of world records are likely to be broken on a very fast Hayward Field track. The likes of Jamaica’s Shericka Jackson, Shelly Ann Fraser-Pryce and Elaine Thompson-Herah, along with Americans Sydney McLaughlin and Athing Mu look look set for dominant performances in their respective events .

However, there is one event which should bring the house down and this is the women’s 100 metres hurdles which definitely will be the hardest to call as any of seven can strike gold here. Fans will have to wait until the penultimate day of the championships for their first view of what is expected to be fireworks as the preliminary round is set for July 23 with the semi-finals and finals to be contesed on the final day.

At the United States championships, world record holder Kendra Harrison bounced back to great form to win the event in a tight finish ahead of Alysha Johnson. Harrison clocked 12.34 seconds and Johnson, 12.35, running in a negative wind of minus 1.4 metres per second as they posted the top-two fastest times in the world going into the World Championships. National Collegiate Athletic Association (NCAA) Division One outdoor champion Alia Armstrong posted 12.47 for third.

Tokyo Olympic Games champion, Jasmine Camacho-Quinn of Puerto Rico, who has been unbeaten all season had been the fastest for the majority of the season with her personal and season’s best of 12.37 before being passed by both Americans.

The top list includes 2018 Commonwealth Games and 2021 Diamond League winner Tobi Amusan of Nigeria who is being coached by Jamaican Lacena Golding Clarke. She is at number four with 12.41. Jamaica’s Britany Anderson, the new national champion and 2017 World-Under 17 winner and Under 18 world record-holder in the event, has a season’s best of 12.45 and is ranked at number six, while defending World champion Nia Ali, a training partner of Anderson in Florida, closes out the top seven with a time of 12 49.

This event will definitely have the fans on the edges of their seats on both days as it should be fireworks from the first round to the final. On the fast track a blanket finish is expected and once the conditions are right the world-record, 12.20, set by Harrison in 2016, could be in danger here as any of the seven top hurdlers can win the gold.