Dols heading into C’wealth Games with positives from World Champs 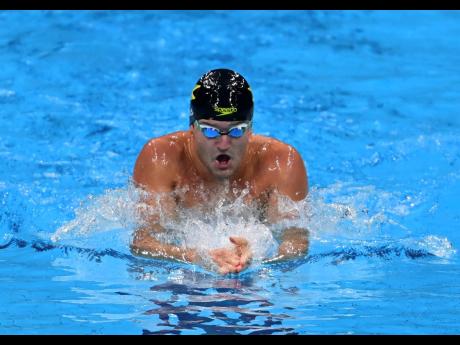 Although Keanan Dols did not perform to his expectations at the recent FINA World Aquatics Championships in Budapest, Hungary, he said there were positives on which he intends to build on going into the Commonwealth Games in Birmingham, England, starting later this month.

Dols, who attended the championships with 19 year-old debutant Kito Campbell, also pointed out that not having a coach at the event was not really an issue for them and that they had very good support from other national swim associations.

“This was my first long-course racing since Tokyo (2019) and my performances weren’t everything I was hoping for, but for where I’m at right now, I’m not too upset with how I swam. Not having a coach in Budapest wasn’t too big of a deal, but I certainly hope that it is avoided moving forward. Both Kito and I were okay, as we had help from some fellow federations with anything we needed,” he said.

Although both failed to progress to the semi-finals, his hope was to produce better times. Nevertheless, he remains optimistic ahead of the Commonwealth Games, and he believes the experience will help young Campbell develop into a more competitive international athlete.

“It was good in Budapest. Wish I could have been a bit faster in the 200m ‘fly’, but I’m still not too dissatisfied with the time. Kito did a great job and I feel that the experience on the senior level taught him a lot about what it takes to be successful,” he said.

The 23-year-old who now ties with Olympian Natasha Moodie, who competed at the 2007 championship in Melbourne and in Rome in 2009, and Michael Gunning, who participated in 2017 in Budapest and in South Korea in 2019 for the third most appearances for Jamaica at the global championships, said he knows what he needs to do to get ready for the Commonwealth Games.

“I’m excited for a good performance. The positives for me from this meet (World Champs) is that I know where I’m at, and I can only build on that leading up to Commonwealth Games,” he said.