Federer hopes to play ‘one more time’ at Wimbledon 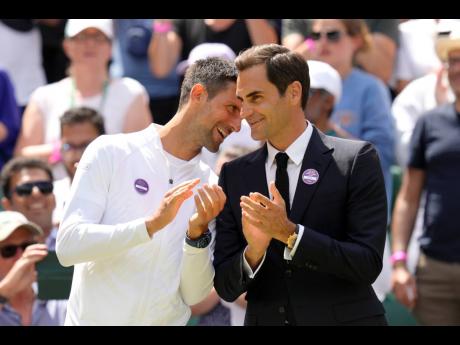 Roger Federer did make his way to Wimbledon this year, after all – not to compete, mind you, but to take part in a ceremony marking the centenary of Centre Court yesterday – and declared his intention to try to return in 2023 with a racket in hand.

“Just tried to be successful here and represent the sport well. I hope I did that,” said Federer, who won a men’s-record eight of his 20 Grand Slam titles at the All England Club and was greeted with a standing ovation. “And I hope I can come back ... one more time.”

Instead of the mandatory all-white playing uniform, Federer wore a dark suit and tie, his purple Wimbledon member’s badge pinned to a jacket lapel. The Swiss star, who turns 41 on August 8 and who has been sidelined for a year by knee problems, was among more than two dozen winners of singles championships at the grass-court tournament who appeared in the main stadium during a 35-minute tribute to a stadium that opened in 1922.

“I’ve been lucky enough to play a lot of matches on this court. Feels awkward to be here today in a different type of role,” said Federer, who had participated in every Wimbledon since his main-draw debut in 1999. “But it’s great to be here with ... all the other champions. This court has given me my biggest wins, my biggest losses.”

His last match anywhere came on July 7, 2021, when he lost at Centre Court in the quarterfinals to Hubert Hurkacz 6-3, 7-6 (4), 6-0. Soon after, Federer had surgery to repair damage to his meniscus and cartilage in his right knee – his third operation on that knee in a span of 18 months.

Federer has said that he plans to return to tournament action at the Swiss Indoors in October.

“Of course I’ve missed being here. I would have loved to be here. I knew walking out here last year, it was going to be a tough year ahead. Maybe didn’t think it was going to take me this long to come back. But the knee has been rough on me,” he told the crowd. “I didn’t know if I should make the trip, but I’m happy standing right here, right now.”

The whole scene was, in some respects, an infomercial for the Grand Slam event itself.

There were videos – three in all – quips from co-hosts Sue Barker and John McEnroe, and performances by Cliff Richard, who used to help kill time by singing during rain delays (a thing of the past, now that Centre Court and No. 1 Court are outfitted with retractable roofs).

Past champions on hand included some still in the brackets this year, such as Novak Djokovic, Rafael Nadal, and Simona Halep in singles, and Venus Williams in mixed doubles.