‘Go after a result’ 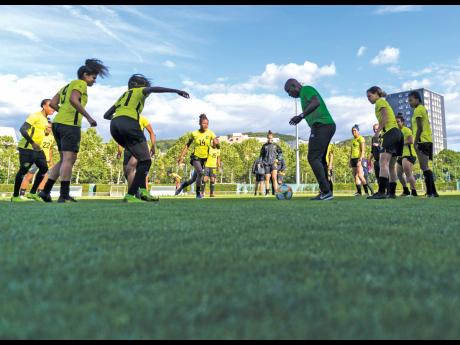 Gladstone Taylor
Assistant coach Lorne Donaldson joins Reggae Girlz in drills during a training session in 2019 ahead of a World Cup match against Australia. 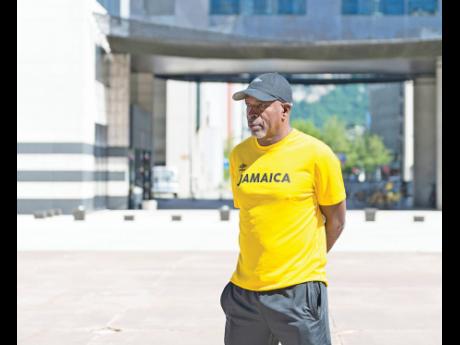 WITH NO practice games before their crucial opening Concacaf Women’s Championship opener against home team Mexico today at the Estadio Universitario in Monterrey, Reggae Girlz coach Lorne Donaldson is depending on the talent of his unit. Kick-off time is 9 p.m.

“I think tomorrow is going to be one of those days. All the Mexican fans are going to be out,” said Donaldson, who took over the job as interim head coach after the resignation of Vin Blaine last month.

Blaine, before ending his stint, which was also in an interim capacity, had taken the team successfully through qualifiers for the championships, with wins over Bermuda (4-0), Grenada (6-1), the Cayman Islands (9-0), and the Dominican Republic (5-1).

Despite coming into the post on the back of some controversy and not having the kind of preparation ideal for this tournament, Donaldson still needs a positive mindset from his charges.

One of the bug bears Donaldson had highlighted in previous interviews was that the fitness of the Reggae Girlz was not where he would have wanted it. But according to the coach, who was assistant when the team historically qualified for France in 2019, that fitness has improved.

“We have seen an improvement in the fitness. We haven’t played a serious game, and sometimes you can’t judge, that but I think we’re fit enough that we can do the job.”

With so many unknowns, there might be the temptation to use the game to figure things out, but the nature of the tournament, Donaldson says, might not allow for that.

“Any tournament you go into, the first game, a lot of times, turns out to be the most important game. Obviously we have to do what we have to do in the first game. It is very important that we go after a result,” said Donaldson, dispelling any thoughts of a conservative approach to today’s encounter.

“The Mexican organisation is quality. They have prepared very well. They have changed a lot in the last four years because they didn’t qualify for the last one, but playing [practice] games and being at home, that’s usually a big advantage, so we have to come in and try to figure out how we are gonna swing that advantage our way,” said Donaldson.

The coach has every belief that his unit can do it, too.

“I think I like my players’ chance of doing that and remain very, very positive about what we can do. If there is any group that can do it, this group can do it.

“We’ve been in Colorado preparing and it has been good. Some of the girls came in late because they have games, and they are coming from all over the world, but we did a lot of preparing to come over here to Mexico. We didn’t have a practice game, but we had a lot of scrimmages that helped.”

In the group’s opening game at 6 p.m. today, the United States will face Haiti.