Solaun happy to be back with Reggae Girlz 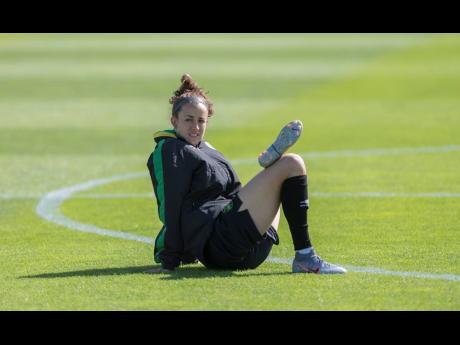 NORTH CAROLINA Courage midfielder Havana Solaun is happy to be back with the Reggae Girlz ahead of their crucial opening Concacaf Women’s Championship opener against Mexico in Monterrey, Mexico, today. The Reggae Girlz, courtesy of a perfect...

NORTH CAROLINA Courage midfielder Havana Solaun is happy to be back with the Reggae Girlz ahead of their crucial opening Concacaf Women’s Championship opener against Mexico in Monterrey, Mexico, today.

The Reggae Girlz, courtesy of a perfect qualifying round, play in Group A of the championship’s group stage with Mexico, the United States, and Haiti ,but Solaun wasn’t around for it.

Instead, Solaun spent her last season out with injury after going down in an NWSL game against Houston in October of 2021.

During the time she was missing, the Reggae Girlz, under the guidance of Vin Blaine, beat Bermuda 4-0, Grenada 6-1, the Cayman Islands 9-0, and the Dominican Republic 5-1 to qualify for the Championship.

Solaun missed playing with the national team and despite not playing any practice games before today believes she has come back to find an even more talented group than the one that qualified to the country’s first World Cup in 2019.

“It’s really good to be back. I feel like it’s been a long time for me. I missed some of the earlier pre-qualifiers because of injury, but it’s been, honestly, for me so refreshing to be back among this group. I’m excited. I,t is a really talented group and we’ve had a really positive start so far,” said Solaun.

As far as Jamaica’s chances of making it to the World Cup from what is agreed to be a tough group, Solaun believes that the country is in a good space as underdogs.

“I definitely fancy Jamaica’s chances. I think we get underestimated, and I think we can use that to our advantage. This is one of the most talented groups that I have been a part of with Jamaica so far, and I am just really excited to see how it all comes together.”

“I think as an entire group we are prepared for this tournament despite not having a lot of time together as a full unit,” said Solaun.