Hall rewards family with first medal at Pan Am Champs 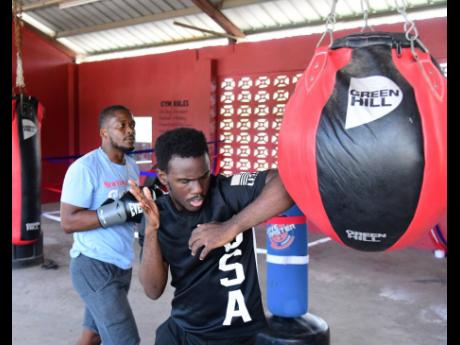 Mixed martial artist Imran ‘Fyah’ Hall said that his family’s support, both financially and emotionally, was the catalyst in securing Jamaica’s maiden medal at the recently concluded Pan American Championships. Hall won bronze in the lightweight (...

Mixed martial artist Imran ‘Fyah’ Hall said that his family’s support, both financially and emotionally, was the catalyst in securing Jamaica’s maiden medal at the recently concluded Pan American Championships.

Hall won bronze in the lightweight (155 pounds) division, sharing the podium with Cristian Galicia of Mexico. American Shane Collins won gold in the event, while Colombia’s Tael Rodriquez got silver.

It was an achievement that Hall said he did not fully appreciate until he was bombarded with messages of congratulations from family and well-wishers, as he initially felt disappointed over falling short of his title-winning goal.

“At first, when I got the bronze I wasn’t that excited about it. But when I got the feedback from everybody on social media, family members called me, telling me congrats; it was overwhelming. That alone uplifted me. That alone made me feel happy,” Hall told The Gleaner. “When I got back home, my family gave me big greetings. My wife, my mother, my father, my friends in the neighbourhood. Everyone was overwhelmed, because it was the first medal for Jamaica at the tournament.”

This was Hall’s first tournament since the COVID-19 pandemic brought sports to a halt. He made his Pan American Championship debut in 2019 but failed to advance past the first round. A second tournament appearance appeared to be in doubt, with financial support lacking for the trip to Monterrey, Mexico.

Hall said that it was his family that provided the necessary financial support to get him to the championships and the reason behind this milestone in Jamaican mixed martial arts.

“I was struggling going into the Pan American Championships. I had to ask family and friends to donate money for accommodations. Almost everyone one of my family members donated money. They are the ones who helped me to get to the tournament,” Hall said.

Hall said that the lack of funding was the main reason that prevented several local fighters from participating in this year’s tournament. With a medal to his name, Hall says that he hopes that fighters get the necessary corporate and government support which will allow greater representation and carve a new frontier in the sport locally.

“I would love for the Government to get involved. and other companies as well, so that we can go in our numbers and represent Jamaica. So we can go as a team to the next Pan American Championships and the World Championships, not just me alone as a sole representative for Jamaica,” Hall said.