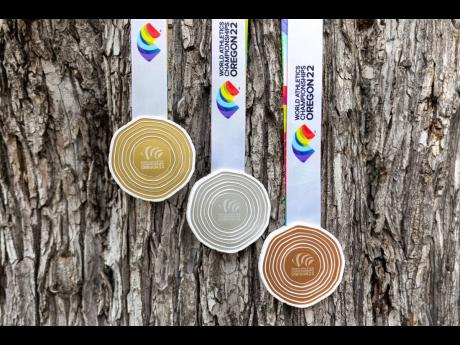 With 10 days to go before the start of the 2022 World Athletic Championship in Eugene, Oregon the local organising committee unveiled the medals for the event today, emphasising the unique nature of the host city.

According to a release by World Athletics today, the medals were made using Corian, a durable and ultra-modern material, a deviation from the traditional die-cast variety, allowing for 'finely detailed carving of intricate relief work featured in the designs'.

Oregon22 Executive Director Niels de Vos said it was important that the medals reflected the distinct nature of the championships, which will be the first held on United States soil.

"Months of cutting-edge creative thought and experimentation into the latest manufacturing techniques went into the medals, designed and fabricated right here in Oregon. The medals are won by athletes as the result of a lifetime of dedication and commitment. They are the best in the world, and our team wanted to ensure a medal which reflected that status," De Vos said in the release.

Oregon22 communications director Jessica Gabriel said they hoped that the medals would stand the test of time.

"The primary goal that drove the design process was to create something truly innovative and glorious that would be immediately recognizable in years to come as Oregon's medals," Gabriel said.

"We worked with Oregon-based companies to centre the project in this place, and together we challenged ourselves to create works of art that would symbolize the significance of an athlete capturing the glory of a global medal here in the heart and home of track and field in the U.S."

Also for the first time in athletics history, Instant Medals will be awarded to the three medal-winning athletes moments after their finals. While the full medal ceremonies with national anthems will still take place, the awarding of the instant medals was created for athletes "to commemorate their individual victory ‘in the moment’ and to share that moment with family and friends".

The World Championships begin on July 15.