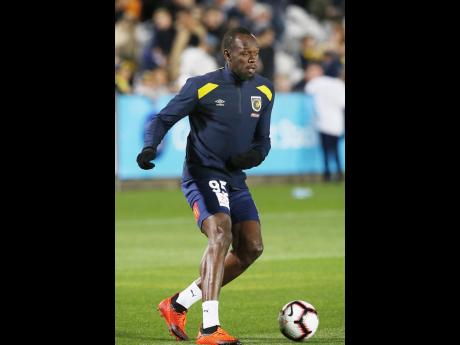 JOURNALIST ‘DOWN Under’ are fuming at track and field legend Usain Bolt after the multiple Olympic and World Championships gold medallist and 100- and 200-metre world record holder made disparaging comments about the Australian A League.

During a recent interview after the much-publicised UNICEF Soccer Aid game where more than $25 million was raised for charity, Bolt called going to the Central Coast Mariners, where he had a training stint in a failed to bid to get a football career off the ground, a mistake.

According to Bolt, the move was a mistake because the level of the A League was too low.

“I made a mistake. When I retired from track and field, I didn’t want to stay in Europe because of the media. I went to Australia, but the level of football there wasn’t good. I should have stayed in Europe. After a year on trials I just said, you know what, let’s move on from that. So, I moved on,” Bolt said.

In response, Australian football commentator, Simon Hill, said the only thing good about Bolt’s play was that it was over.

“Well, it certainly wasn’t good when he was playing, that’s for sure. Brilliant athlete, but nowhere near a pro footballer. Thank goodness these sort of PR stunts are long gone,” Hill wrote on Twitter.

But Hill wasn’t the only media practitioner to lay into Bolt for the comments, with Fox Sports News football reporter, James Dodd, chiming in as well.

“This is laughable from Usain Bolt,” wrote Dodd, also on Twitter.

“I was there reporting and watching his training sessions at the Mariners. He was garbage. He’s a Sunday league footballer at very best and not a good one either.”

Veteran football journalist, Ray Gatt, suggested Bolt was not good enough to be a serious part of the A League.

“He couldn’t keep up during training sessions. His touch was terrible, positioning awful. Out of his depth,” said Gatt.

Following his retirement from track and field in 2017, Bolt attempted to pursue a career in football and was given an opportunity with the Mariners, featuring in two pre-season games and scoring twice.

The trial reportedly ended when the Central Coast Mariners offered Bolt a one-year deal worth AU$150,000. That offer was rejected as the retired sprinter and his team are reported to have wanted a much bigger deal.

At the time, Australian legend, John Aloisi, had said introducing Bolt to the A League would have a deleterious effect on the credibility of the country’s football, while Australian striker Adam Taggart had said the Mariners and the league would have been better served offering a teenager the same opportunity.