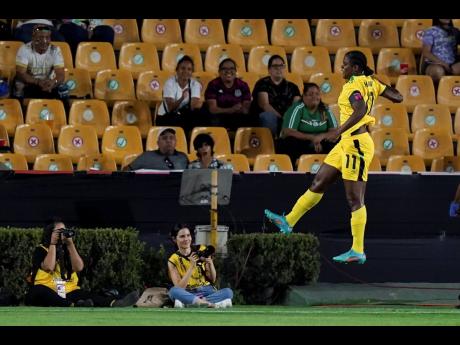 REGGAE GIRLZ captain, Khadija Shaw, is pleased with the attitude of her teammates after the team eked out an opening victory against Mexico in the Concacaf Women’s Championship on Tuesday.

Shaw scored the only goal of the game and said it was very good to see her team manage a clean sheet and come away with what was expected to be a difficult game to win.

“It’s always good to win. Especially in this atmosphere,” said Shaw after the game inside the Estadio Universitario in San Nicholas de los Garza, Mexico.

“I’m so proud of the girls. We knew it was going to be hard but we stuck to the task and got the job done at the end of the night,” she said.

Speaking about the overall performance of the Girlz, who many agreed could have lost the game, Shaw said she was pleased.

“I think it was good. Before the game, the coach [Lorne Donaldson] spoke to us and told us where the Mexicans are strongest and where we need to concentrate and lock in. I think once we concentrated and locked in, we threw them off their game. We stuck to the task and at the end of the day, we are the winners,” she said.

This was the first time the Jamaicans were getting the better of their Mexican counterparts, who enjoyed 58 per cent of the possession and carved out very reasonable chances throughout the game.

The Jamaicans, who are seeking their second berth at a FIFA Women’s World Cup after making the boat to France in 2019, will go into what is expected to be an even tougher assignment tomorrow against the United States.

The Jamaicans are drawn in Group A of the championships along with Mexico, Haiti and the United States.