Reggae Girlz have it all to do against World Champions 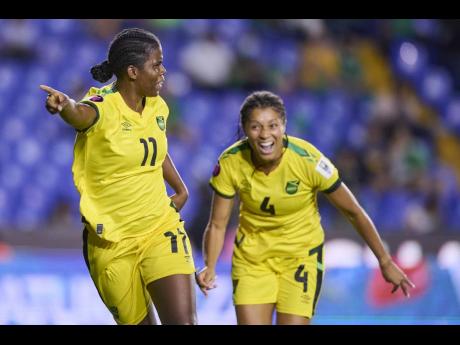 Courtesy of concacaf.com
Reggae Girlz captain Khadija Shaw (left) and teammate Chantelle Swaby celebrate after opening the scoring against Mexico in a Group A Concacaf Women’s Championship match on Monday.

TOP SPOT in Group A of the Concacaf Women’s Championship is up for grabs this evening but for Jamaica’s Reggae Girlz, this may be a bridge too far.

The Reggae Girlz will go up against the world’s number-one team in the United States at the BBVA stadium in Monterrey, Mexico, beginning at 6 p.m.

The other Group A game will pit Mexico and Haiti, who both lost their opening encounters to Jamaica and the US, respectively. That game takes place at 9 p.m. inside the same stadium.

While the Reggae Girlz are buoyed by the fact that they beat Mexico for the first time in their history, the US, the reigning World Champions, had a more impressive first outing.

Jamaica won the game against Mexico 1-0, but truth be told, could just have easily have lost the encounter.

Still, there are positives, with both Reggae Girlz captain Khadija Shaw and interim coach Lorne Donaldson lauding the Caribbean team for its tenacity and will to win.

“It’s [Mexico] a very strong team. We came into this game without playing a practice game. I’m very proud of the girls for the way that we stood up and fought all night,” said Donaldson.

“I’m so proud of the girls. We knew it was going to be hard but we stuck to the task and got the job done at the end of the night,” she said.

But the United States have already seen that stickiness, finding Haiti in the first encounter not only physical, but unafraid of their world status.

Haiti also displayed good technical ability in the encounter but still found themselves a distant second best, losing 3-0, courtesy of an Alex Morgan brace and a goal by substitute Margaret Purce.

Shaw scored the only goal of the encounter against Mexico, an eighth-minute header.

The United States leads what is considered the group of death, courtesy of a superior goal difference, but whoever wins tonight will take a valuable three-point lead into their final encounter.

The group will shape up more clearly after tonight’s round of games, but with only the top two set to make it to the semi-finals and earn a spot at the 2023 World Cup, the loser of the game between Jamaica and the United States could find themselves in a battle for that second spot.

The problem with that battle is that the fate of the teams looking for that second spot may not completely lie in their own hands.

What is more, the Jamaicans, who went into their game against Mexico on the back of three losses, have been handily beaten every time they face the United States.

The Jamaicans, in the Concacaf Women’s Championship, were beaten 10-0 and 6-0 in their two encounters against the World Champions, who have only ever lost one qualification.

The final game of the group stage for the Jamaicans takes place on Monday against Haiti, while the US will face Mexico. All final group games are to be played simultaneously.