Baptism of fire for ‘Crocs’ 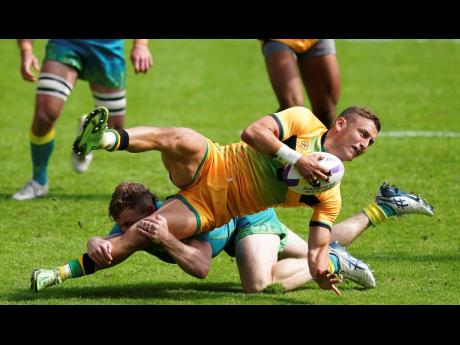 Captain Conan Osborne admitted that Jamaica’s introduction to the 2022 Commonwealth Games Rugby Sevens was a sobering baptism of fire after crashing to a 62-0 opening game defeat against Australia.

The ‘Crocs’ went on to also lose 45-0 to Kenya during the opening day’s evening session to end any hopes of making the quarter-finals in their second appearance at the competition.

Still smarting from the 10-try mauling received at the hands of the fully professional Australians, Osborne, whose side contained mostly heritage players but included local-based Jamaicans Ronaldeni Fraser and Oshane Edie in the starting line-up, said:

“We were disappointed in ourselves as we knew what we had to do and had a game plan which maybe got away from us in the excitement.

“Australia are among the top teams in the world for a reason and we ended up chasing the game.

“Perhaps we gave them too much respect and too much time on the ball and defensively just didn’t go and get them.”

Britain-based Osborne emphasised that the men in predominantly yellow shirts and shorts were far from overawed about the task of taking on an Aussie team which won the London Sevens at Twickenham in May – the most recent of the World Series events – and currently rank number two in the world behind South Africa.

Part-time Jamaica stand 19th in the rankings and Osborne continued:

“We were excited to think that we’d start against Australia as we have played in World Series tournaments now after getting into the Commonwealth Games for the first time in 2018.

“We are now expected to be at these tournaments and want to play the likes of Australia, New Zealand and South Africa and maybe take a big scalp sometime.”

It took Australia barely 11 seconds to get on the scoreboard after Jamaica fumbled the kick-off and Samu Kerevi raced in for the first of his hat-trick of tries.

The closest the Crocs’came to breaking their duck was just after half-time when Osborne sent Dy’neal Fessal over in the corner but the Leamington Rugby Union Football Club player lost control as he attempted to ground the ball.

Jamaica are due to complete their Pool D games against Uganda today.