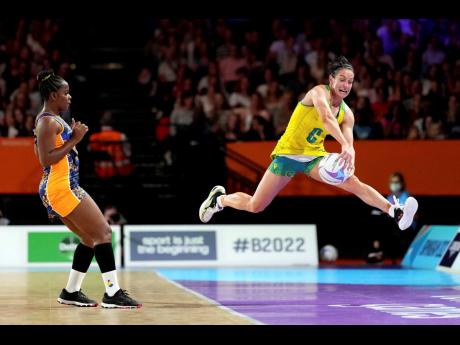 AP
Australia’s Ashleigh Brazill (right) manages to keep the ball in during the Netball Pool A match between Australia and Barbados at The NEC on day one of 2022 Commonwealth Games in Birmingham, England yesterday. 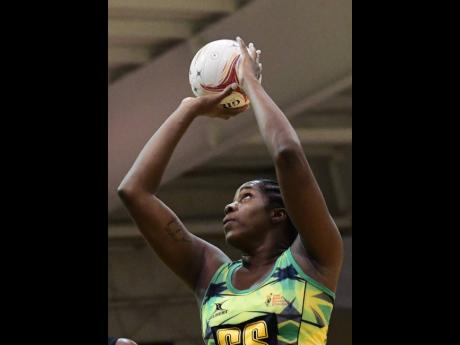 Jamaica eased to a comfortable but not an overwhelming victory at the start of their bid to improve on their bronze medals in the last two and three of the past five Commonwealth Games.

Gold medal favourites Australia and England had already posted big wins during the afternoon before the Sunshine Girls commenced the evening’s entertainment at the National Exhibition Centre Arena in Birmingham with a 72-43 defeat of Wales.

In front of a fervently passionate crowd, mostly supporting the Welsh side, the ladies in red scored first but Jhaniele Fowler responded immediately with four straight goals.

The plucky Welsh, ranked eighth to Jamaica’s fourth in the world, refused to be shaken off during the opening quarter and, despite the irrepressible six feet five inches goal shooter Fowler’s exploits, only trailed 11-10 with three minutes to go before the first break.

The advantage eased out to 55-31 by the end of the third quarter with 32-year old Fowler dominating the circle and boasting a tally of 32 goals from 33 attempts.

“We are really satisfied with that.

“We controlled most of the game and did what we practised and can fix the places we went wrong.

“We must make sure we eliminate the contact, keep possession and score when we get a turnover.

“The girls were a little bit nervous at the start of our first competition for a while.”

Next up for the Sunshine Girls are South Africa today with Caribbean rivals Barbados their opponents on Monday.

Fowler, who played in both bronze medal-winning third-place play-offs, defeating England 52-48 in Glasgow in 2014 and then New Zealand 60-55 at Gold Coast four years later, added:

“We know that South Africa are a good side and are going to challenge us but we have to keep putting it together for the rest of the games.”

“I didn’t get a chance to see Australia play this afternoon (beating Barbados 95-18) but from the result, I’m sure they were very good.”