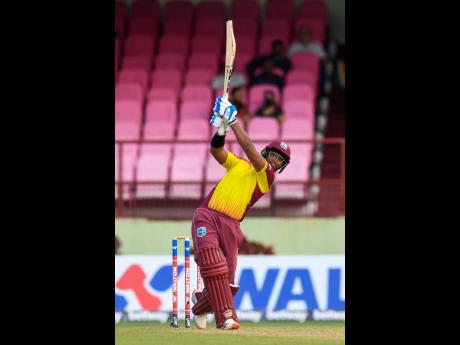 CAPTAIN NICHOLAS Pooran believes West Indies need to capitalise on the “big moments” if they are to perform consistently in Twenty20 Internationals.

West Indies bungled a run chase in the opening T20 International on Friday at Brian Lara Stadium, collapsing to 122 for eight off their 20 overs in pursuit of a challenging 191 set by India, to lose by 68 runs.

“We obviously disappointed everyone here in the stadium [but] we’re going to have games like this where we’re going to get shot out for not enough,” Pooran said.

“Batsmen did get starts but we didn’t capitalise on those starts. We needed partnerships and we didn’t win the [big] moments today and it’s as simple as that.”

He added: “The guys, they did show up but we need to hold our nerve in big moments, especially when the pressure is on. We need to embrace it.”

The defeat came on the heels of a 3-0 whitewash in the preceding One-Day International series at Queen’s Park Oval, leaving the hosts with seven straight losses in the white-ball format, following on from the disappointing Bangladesh series in Guyana earlier this month.

More troubling, Friday’s loss was the Caribbean side’s 12th in their last 13 T20 Internationals against India, dating back to 2018.

Region to have patience

But Pooran said it was important the white-ball side continued to believe in themselves and urged the region to have patience with the results.

“The guys are getting opportunities and that is wonderful for this group and once we can have both our white-ball teams, the guys playing together and in different formats, I think it will be really good for us,” he pointed out.

“But we just need to have faith in this group, stay patient and enjoy this journey here.”

Despite the defeat, Pooran said every game represented an opportunity to enhance preparation for the T20 World Cup in Australia scheduled for later this year.

“With the conditions in Australia, we need our team to obviously get a lot more experience and these eight games we have in the Caribbean are the games we have to get experience for the guys,” the left-hander stressed.

“Today was a good showing for us, especially with the wind factor. We bowled in good areas but we didn’t bowl in good areas for a long period of time and it’s good for us to play together and play in front of a big crowd because Australia is going to be the same.”

West Indies take on India in a double-header at Warner Park in St Kitts on Monday and Tuesday before heading to Florida for the final two matches next weekend.