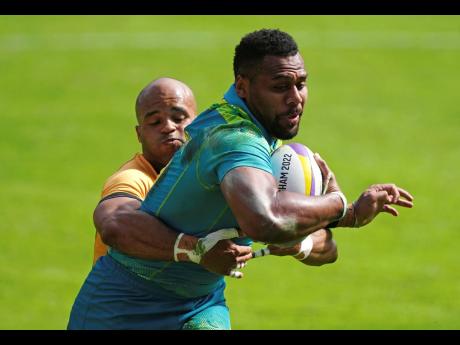 AP
Australia’s Samu Kerevi (right) is tackled by Jamaica’s Dy’Neal Fessal during the Men’s Pool D Rugby Sevens match on day one of the 2022 Commonwealth Games at Coventry Stadium in Coventry, England on Friday July 29, 2022. 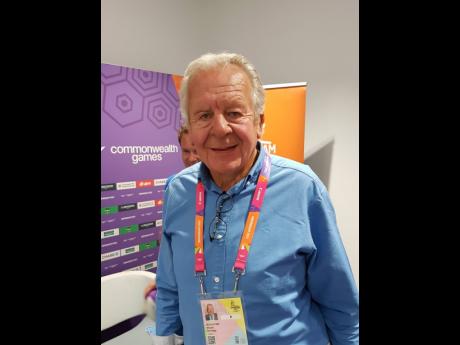 The president of World Rugby and former England Grand Slam winning captain Sir Bill Beaumont, now 70, has insisted that the development of the game’s lesser-heralded countries was high on their priority list and cited the success of Uganda, who beat Jamaica 40-0 then drew 12-12 with mighty Australia, in the current Commonwealth Games should inspire other emerging nations.

Jamaica, whose first Commonwealth Games in rugby was in 2018, failed to score a point while being defeated in all three pool matches, but rallied to convincingly beat Malaysia 28-7, through tries from Tyler Bush, Fabien Turner and Mason Caton-Brown (two) in yesterday’s positional deciders.

Mason-Brown scored twice more in the evening’s 26-24 13th place play-off victory over Sri Lanka, leaving the former London Broncos and Wakefield Trinity rugby league player reflecting saying, “We aren’t happy with our overall performance this weekend, but it was good to finish with two wins.

“We had just a week’s training together before the event so it’s a massive task to take on the full-time professionals, but we’re getting there.”

The restrictive effects of COVID-19 promoted Jamaica to make their World Series debut after becoming the first Caribbean nation to qualify for the Rugby Sevens World Cup in 2018.

Beaumont heralded the recent growth of the game, saying, “We need to invest in regional competitions so there is a way for a country to progress and work their way forward and maybe end up in the World Series, there’s no reason why that can’t happen.

“We invest in Rugby Africa and Rugby Asia and encourage the Challenger Series, with promotion and relegation enabling them to get into the World Series.

“Rugby Americas North is very strong and George Nicholson, who is based in Barbados, is very enthusiastic about driving the competition there (in the Caribbean).

“Look at the fantastic athletes that come from that region so it’s very important that we work to ensure that there are proper competitions in that area.

“It’s obviously very expensive to fly from island to island which could make it cost prohibitive to do all we would like.”

Beaumont, capped 34 times for England - a then record for a lock forward - added with a whimsical smile, “I can’t think of a better place to stage a competition - I’ll go and book my plane ticket tomorrow if it could be arranged!

“We are World Rugby and have to grow the game and Sevens is the perfect vehicle for us to do that.

“We have a World Cup next year in France which we hope will give us more funding to help all the regions.

“We staged a very successful competition in Japan in 2019 which enabled us to distribute funding for every single country in every region.”

Jamaica are among the nations invited to a one-off Challenger Series event in Santiago, Chile from August 12-14, where the prize to the winners is a place in the 2023 HSBC World Rugby Sevens series.

The ‘Crocs’ are due to face Hong Kong, Tonga and Zimbabwe in Pool B with the top two from each group along with the two best-third-placed teams qualifying for the quarter Finals, before the semi-finals and a final.