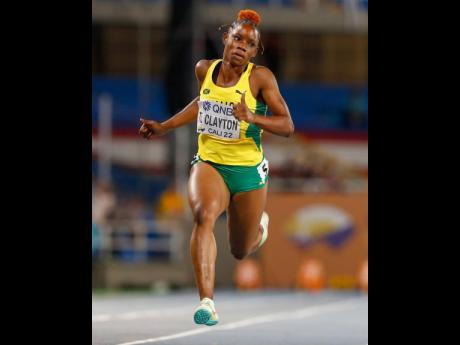 Courtesy of World Athletics
Jamaica’s Tina Clayton glances at the clock on her way to winning the women’s 100 metres at the World Athletics Under-20 Championships in Cali, Colombia, on Wednesday night.

THE JAMAICA camp in Cali, Colombia, is still in a celebratory mood following the 1-2 finish in the women’s 100 metres on Wednesday night at the World Under-20 Championships after Tina Clayton clocked national and championships record 10.95 seconds to retain her title, while Serena Cole finished second in 11.14 seconds, just one hundredth of a second outside of her personal best.

Michael Dyke, coach of both athletes at Edwin Allen High School and part of the Jamaica coaching staff in Cali, was in a joyous mood as he spoke about the plans of his athletes coming into the championships.

“First, I must say this was expected, as we strategised well coming into the championships,” he said.

Dyke said he was not fazed by the fast times in earlier rounds of the event where Tima Seikeseye Godbless of Nigeria and N’ketie Sedo of the Netherlands posted national records of 11.09 and 11.16 seconds to be the two fastest qualifiers. Clayton and Cole had only posted moderate times of 11.38 and 11.39 seconds.

“Both athletes showed a lot of maturity as they ran based on instructions not to press the gas. They were told to hold back for the final because medals are not given out in the first and second round,” said Dyke.

The United States’ Shawnti Jackson was the fastest qualifier going into the final with a then personal best 11.16, ahead of Clayton 11.17 and Godbless 11.20. Cole was sixth overall with 11.29.

“Both Tina and Serena had prepared well and I knew they were ready to deliver and I knew that those athletes ran too hard in the earlier rounds and could not maintain that in the final,” said Dyke.

Dyke, who made a sacrifice by pulling Serena out of the long jump, was extremely happy for her.

“Serena was determined to get a medal as she was in medal form in Nairobi last year but did not get the chance to compete in the event after also sacrificing the long jump and she was really pumped up,” he said.

“I told her to get over that and focus on the job at hand, and that she did. I am so proud of her.”