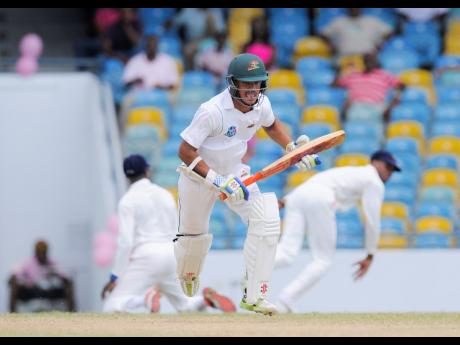 TEST HOPEFUL Tagenarine Chanderpaul missed out on a half-century as West Indies A took command of their opening four-day ‘Test’ against Bangladesh A here on Friday.

At the close on day two at the Daren Sammy Cricket Ground, the hosts were well placed on 165 for three, requiring only three runs to overhaul Bangladesh A’s first innings of 167.

Tevin Imlach was unbeaten at the end on 23, partnered by captain Joshua Da Silva on 14.

Earlier, fast bowler Marquino Mindley added a further two wickets to his tally to end with five for 59 as Bangladesh A, resuming from their overnight 135 for six, lost their last four wickets cheaply.

Captain Mohammad Mithun, unbeaten on 42, was first out for exactly 50, striking eight fours off 85 deliveries in a shade over two and a half hours.

Fast bowling all-rounder Justin Greaves added another wicket to his collection to end with three for 26.

In reply, the 26-year-old Chanderpaul anchored an opening stand of 78 with Solozano, facing 120 balls in just over three hours at the crease and striking five fours and a six.

Chanderpaul then added a further 42 for the second wicket with Carty before finally perishing via the run-out route with his landmark in sight, stranded mid-pitch in a mix-up over a second run.

Carty faced 62 deliveries and counted five fours before falling with 15 runs added to leave West Indies 135 for three, but Imlach and Da Silva saw out the day safely in an unbroken 30-run fourth-wicket stand.