Kennedy determined to make up for 400m error 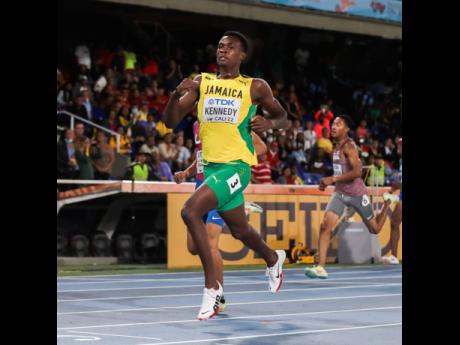 Courtesy of World Athletics
Jamaica’s Delano Kennedy on his way to setting a personal best, 45.59 seconds, in the semi-finals of the men’s 400 metres at the World Under 20 Championships in Cali, Colombia on Wednesday.

DELANO KENNEDY is determined to help Jamaica to gold in the men’s 4x400 metres relay today after his disqualification in the individual final on Thursday. Kennedy, who came to the championships with a personal best, 46.58 seconds, was on course for...

DELANO KENNEDY is determined to help Jamaica to gold in the men’s 4x400 metres relay today after his disqualification in the individual final on Thursday.

Kennedy, who came to the championships with a personal best, 46.58 seconds, was on course for something special after first lowering it to 46.21 in the preliminary round where he finished third, and then again in the semi-final with 45.49 seconds.

Drawn in lane six, Kennedy did the unthinkable, he false started. A very disappointed Kennedy spoke to Gleaner Sports, minutes after a brilliant second leg in the men’s 4x400-metre relay preliminary round yesterday.

Kennedy gave the Jamaicans a big lead, the quartet going on to win the heat in three minutes, 07.32 seconds (3:07.32). The time is the second quickest heading into today’s final.

“I was very devastated and disappointed after false starting in the finals, because I was very confident that I would have gotten a medal,” he said.

Neil Harrison, a member of the coaching staff in charge of the 400m group here in Cali, was also confident that Kennedy was about to do something special in the individual final.

“His preparation has been excellent and what he was doing in training was unbelievable and, definitely, he was ready to produce another big performance,” said Harrison, no stranger to turning out top quarter-milers at this level.

Disappointment behind him, there is a medal on offer today, if he can repeat the kind of performance he brought to the preliminary round.

“I have put that behind me and, with the encouragement from my teammates and the coaching staff, I am determined to make up big time for that and help Jamaica to win the gold medal in the finals,” he said.