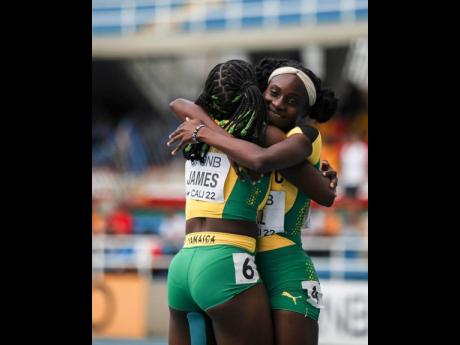 Courtesy of World Athletics
Jamaica’s Kerrica Hill (right) and teammate Alexis James hug in celebration of a one-two podium finish in the women’s 100-metre hurdles on the final day of the World Under-20 Championships inside the Estadio Olimpico Pascual Guerrero in Cali, Colombia, yesterday.

The day saw the Jamaicans end second on the medal table behind the United States, though the island had the most podium finishes of the championships.

Hill, running in the first event on the track, the women’s 100-metre hurdles, overcame a stumble at the start to storm to 12.77 seconds.

The win was made all the sweeter as Hill looked back to find Alexis James had followed her to run a personal best 12.87 and second place. The fast Jamaican one-two finish also pulled Hungary’s Anna Tóth to a national Under-20 record 13.00.

The Jamaicans weren’t to be involved again before the men’s and women’s 4x400 relays where they picked up two silver medals behind United States quartets.

Among the women, the team of Dejanea Oakley, Abigail Campbell, Oneika McAnuff and Aliah Baker fought off the attention of Great Britain and Northern Ireland (three minutes, 31.86 seconds) to finish second in 3:31.59. The United States stayed well out of the fray, winning in 3:28.06.

A few minutes later, the quartet of Shemar Palmer, Shaemar Uter, Jasauna Dennis, and Delano Kennedy repeated the feat, finishing in 3:05.72 for silver.

The medal was even more of a challenge for the men, as Kennedy was forced into a brilliant anchor leg to overtake the teams of South Africa, Spain and Canada. Canada were third in a national Under-20 record 3:06.50, while the United States were comfortable winners in 3:04.47.

Jamaica ended with 16 medals, six gold, seven silver, and three bronze. The United States, who ended with 15 medals, topped the table by virtue of having seven gold.