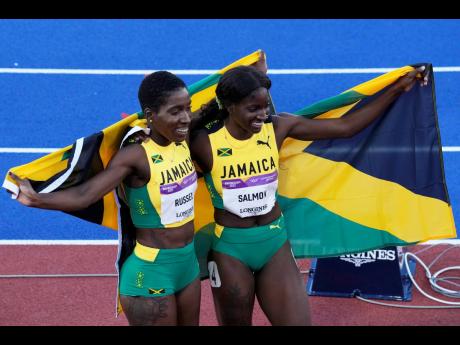 AP photo
Gold medallist Janieve Russell (left) and silver medallist Shiann Salmon, both of Jamaica, celebrate at the end of the women’s 400-metre hurdles during the athletics competition in the Alexander Stadium at the Commonwealth Games in Birmingham, England yesterday.

JANIEVE RUSSELL spoke of never losing focus or belief after leading Jamaica to a famous 1-2 in the 400m hurdles final in Birmingham.

Her 54.14-second triumph earned a third consecutive medal and second successive gold at the Commonwealth Games, having started with bronze in Glasgow 2014 and followed up with victory in Gold Coast four years later.

The former World junior champion came from behind to lead home young compatriot Shiann Salmon, who clocked 54.47, although hopes of a Jamaican clean sweep were dashed when fast-starting Rushell Clayton, who led until half way down the home straight, faded over the closing hurdles and was overhauled by a personal best from 22-year-old South African Zeney van der Walt for the bronze.

“It means a lot to me as I was very disappointed not making the finals of the World Championships, based on the form that I’m in,” stated Russell after her victory lap.

“I had to remind myself who I am and why I’m here.

“I made a lot of mistakes, so the time could have been faster.

“This one means a lot because the previous Commonwealth medals I’ve got, I didn’t have a World Championships before – not in the same year.

“To come back after that disappointment means a lot.”

Salmon, 23, also timed the race well after a steady run down the back straight.

She moved into second place, passed a tiring Clayton on the run-in to cling on to second place in the tightest of photo finishes from van der Walt. She commented:

“Unfortunately, we didn’t, but I’m very happy with my performance and proud of Janieve for defending her title.

“I knew it was a possibility to get onto the podium and just executed my race strategy.”

“For a small country like Jamaica to do this well is so good.”

In recent times, World record holder, Sydney McLaughlin, Dalilah Muhammad and Femka Bol have dominated the world stage over the one-lap hurdles but Russell insists they must never lose heart and hope of bridging the gap, adding:

“Do not be afraid – McLaughlin, Muhammad and Bol have proved that you can run fast with obstacles in the way. So we must keep striving and keep motivating ourselves and I’m determined not to be frightened to push myself to a new limit.”

If Salmon was left to thank technology, there was bitter disappointment for Natoya Goule in an equally close finish to the 800m.

Habitually front-running Goule led the entourage around much of the opening 700m, only for Kenya’s victorious Mary Moraa, England’s Keely Hodgkinson to come past with Scotland’s Laura Muir outdipping the 31-year-old physical education graduate for the last medal on offer, despite the Jamaican registering a season’s best of one minute, 57.88.