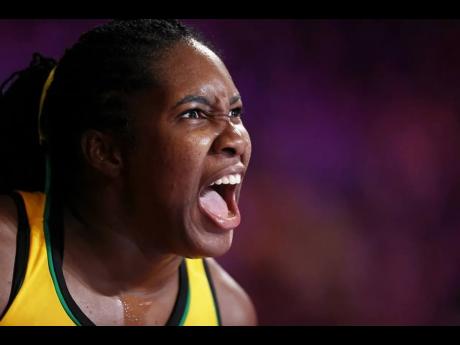 Courtesy of birmingham2022.com
Jamaica’s Jhaniele Fowler roars with delight after her Sunshine Girls got the better of New Zealand in their semi-final match on day nine of the Birmingham 2022 Commonwealth Games at NEC Arena yesterday in Birmingham, England.

JAMAICA’S HEAD coach Connie Francis says her Sunshine Girls will leave everything on court when they go up against Australia in today’s final of the Commonwealth Games in Birmingham, England.

The Sunshine Girls, who won the bronze four years ago in Gold Coast, Australia, will be making their first appearance in the final at a major championship.

The Jamaicans will enter today’s contest against Australia, who won the silver four years ago, oozing confidence having defeated their opponents 57-55 in the group stages of the competition last Thursday.

The Sunshine Girls secured their place in today’s final with a comfortable 67-51 victory over New Zealand in the semi-final yesterday.

Francis told The Gleaner that, based on the play of the Sunshine Girls to this point, a gold medal is the more likely of the two outcomes but that the team would not get ahead of itself.

“The team is feeling very upbeat and we are not overconfident because we know that this is an Australian team that can rise, and I know that they are coming hard at us,” said Francis.

“However, we know that we have our weapons and also we are playing excellent netball and we have one of the most feared shooters in the world in Jhaniele (Fowler), and we have a mid-court that can get the ball to her,” said the veteran coach.

Francis pointed out that all her players were aware of what was at stake and therefore counted themselves as ready to give 100 per cent for the country.

“I think that we will be equally up to the task of going up against them, but we just have to take care of the ball and make good decisions at all times out there,” she said.

“We have to attack and defend and so the girls will be leaving everything on the court in this final game because they know that winning the gold medal will be a massive achievement for them and for Jamaica’s netball,” said Francis.

Fowler, who is rated as the best goal shooter in the world, mimicked the coach’s sentiment, saying the team was ready.

“We are feeling really good knowing that we have great momentum going into the final and that we have prepared ourselves mentally and physically for this game,” said Fowler.

The Australians booked their place in the final after defeating defending championships England 60-51 in the second of yesterday’s semi-finals.