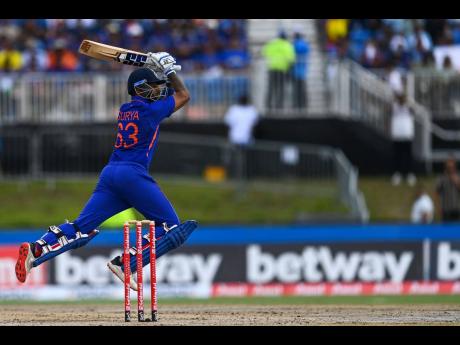 ERRATIC WEST Indies crashed to their 14th defeat in the last 16 Twenty20 Internationals against India, with Saturday’s 59-run drubbing at Central Broward County Park Stadium culminating in a fifth straight series loss to the Asian powerhouses.

Asked to chase 192 in order to level the five-match series and set up a decider today at the same venue, West Indies disintegrated quickly to be dismissed for 132 in the 20th over.

Captain Nicholas Pooran and his vice-captain Rovman Powell posted a joint top score of 24 but were the only ones to pass 20 as West Indies, yet again, suffered from a lack of partnerships.

Rookie left-arm seamer Arshdeep Singh ripped through the innings with three for 12 while seamer Avesh Khan (2-17), leg-spinner Ravi Bishnoi (2-27) and left-arm spinner Axar Patel (2-48) all finished with two wickets each.

India had earlier gathered 191 for five from their 20 overs after being sent in, the dashing Rishabh Pant top-scoring with 44 from 31 balls, captain Rohit Sharma chipping in with a 16-ball 33 and Sanju Samson hitting an unbeaten 30 from 23 deliveries.

The visitors raced to 66 from the first power play and, even though fast bowler Alzarri Joseph (2-29) pulled things back in his four-over spell, India still managed to plunder 45 runs from the last five overs of the innings.

“They got off to a flying start but I’m really happy with the way the guys came back and restricted them to 190-odd. We felt like that was par on the wicket,” said a dejected Pooran.

“We just needed a really good partnership [in the run chase] but it seemed, unfortunately, like we couldn’t build a partnership.

“We know as a unit we want to win games and tomorrow [today] is another opportunity for us to come out, understand the game, learn, get the opportunity, take it and try our best to win.”

Rohit was at the heart of his side’s early enterprise, lashing two fours and three sixes in a 53-run opening stand with Suryakumar Yadav who punched a 14-ball 24.

Pant, who counted half dozen fours, then supervised the middle overs by anchoring two key stands – 47 for the third wicket with Deepak Hooda (22) and 38 for the fourth with Samson.

The expensive Obed McCoy (2-66) got Pant to hole out in the deep in the 15th over but Samson and Axar Patel (20 not out) provided the late fireworks.

“The conditions were not easy but we got to a good score,” Rohit said.

“We batted really well. [There was] a lot of thought behind how we batted. That was good to see.”

West Indies then lost Brandon King (14) and Devon Thomas (1) to plunge to 22 for two at the start of the fourth over but Pooran and Powell raised hopes of a revival with a 27-run, third-wicket stand which proved to be the best of the innings.

Pooran had blasted a four and three sixes in a fiery eight-ball cameo when tragedy struck at the end of the fifth over. He punched a delivery to cover and set off for a single but made a hash of his communication with Powell and found himself stranded mid-pitch.

Kyle Mayers (14) then holed out mere inches inside the ropes at long off in the seventh over, Powell smacked an Axar full toss into long on’s lap before Jason Holder (13) squirted Arshdeep to deep cover in the 12th over, as wickets fell steadily.