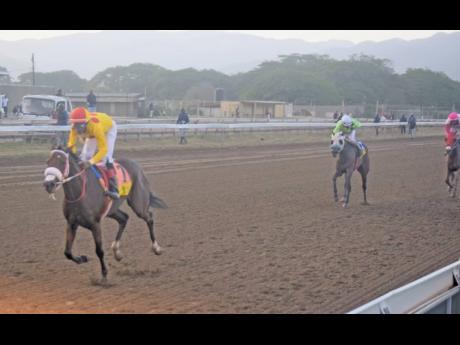 OUR ANGEL confirmed her status as the second-best filly in the country with a convincing victory in yesterday’s 10-furlong Jamaica Oaks, thwarting bids from GOLDEN WATTLE and SILENT MISSION in a five-length win over joint 2-1 favourite SUNSET SILHOUTTE.

OUR ANGEL entered the event off a strong third-place run behind colts and geldings at nine furlongs and 25 yards on July 16, following back-to-back second-place efforts to Saturday’s Jamaica Derby winner, ATOMICA, in the Portmore Stakes and 1000 Guineas.

Settled behind GOLDEN WATTLE passing the stands for the first time, OUR ANGEL kept the Jamaica Two-Year-Old Stakes winner honest on the lead while SILENT MISSION joined the fray approaching the half-mile marker.

Travelling best of the trio, OUR ANGEL surged to the lead three and a half furlongs out, leaving GOLDEN WATTLE chasing and SILENT MISSION quitting the challenge off the home turn.

Set down for the drive by Reyan Lewis, OUR ANGEL turned back GOLDEN WATTLE’s attempted rally along the rail to register her third career win from 12 starts, clocking 2:11.1 for the trip.

GOLDEN WATTLE paid the price for her ambitious attempt, relegated to fourth close home by runner-up SUNSET SILHOUTTE and PELICULA closing from off the pace.

OUR ANGEL, owned by Racing Assocs 2, handed Robert Pearson his second-biggest career win following WILL IN CHARGE’s victory in the 2018 Diamond Mile.