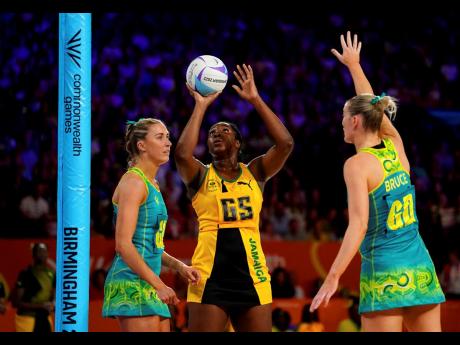 AP
Jamaica’s Jhaniele Fowler (centre) attempts to shoot during the netball gold medal match against Australia at the NEC Arena on day 10 of the 2022 Commonwealth Games in Birmingham, England, yesterday

ON SUNDAY, the Sunshine Girlz played their first Commonwealth Games netball final against Australia in Birmingham, England, and local alcohol distiller Wray and Nephew announced that they would commit $14 million over the next three years to the national netball programme.

Netball Jamaica (NJ) president Tricia Robinson gladly welcomed the contribution but insisted that a lot more was still needed to make up their target of $41 million needed to properly prepare for the World Cup in South Africa next year.

“We do not have the resources that we need. We are grateful that Wray and Nephew has come on board to support us. We are also grateful to our lead sponsor Beryllium, and we are hoping that more corporate companies come on board because we do need more,” she said.

“The team tours New Zealand in September to continue our journey for the World Cup in Cape Town, 2023, and that is another step in our intention to win the World Cup

“So we are looking forward to the support from corporate Jamaica to get us the support to get there. Our target is $41 million, which is a lot, but collectively, it is reachable. So this is a start to our target.”

After beating world number one Australia in the group stage and New Zealand in the semi-final, the Sunshine Girls fell short after Australia turned the tables in Sunday’s decider to deny them the gold.

Robinson noted that despite not getting the desired result, she was extremely proud of their effort.

“When the ladies put on the black, green, and gold they play for pride. The girls played their hearts out, and we are extremely grateful.

“We wanted to give the nation the gold, but it was not to be. But the girls gave it their all, and we are very proud of them.

“We have never played for the gold medal, and we played for it today (Sunday) and were rewarded with the silver. So we look forward to the next Commonwealth Games when we will look to take home the gold,” she said.

Meanwhile, Wray and Nephew’s marketing manager Pavel Smith said over the years, there have been calls for public and private-sector support to match the successes of the Sunshine Girls who have consistently been world-class on the global stage.

“We aim to support the Sunshine Girls in executing incredible performances like we have seen at the Commonwealth Games.

“The Sunshine Girls have consistently showcased to the world what true Jamaican character and spirit look like.

“The $14 million cash will go towards their gear, local transportation, international travel, and other recurring expenses that they have been vocal to the public about,” he said.